My road to becoming a published author was a long one. I couldn't have been more than nine years old when I wrote my first short story. Actually it was a collection of several stories each one probably no more than a page or so long. I made a little booklet and presented it to my father. He was very proud and made a big fuss and that made me happy. I don't remember what the stories were about, but I loved the look on his face when he read them.

It would be years before I even came close to achieving my goal. My teenage years were rough; my father died just before I turned thirteen and I became rebellious. My love of writing faded into the background. After graduating from high school I went to London with a friend. We lived there and made a feeble attempt to co-author a novel about a rock band. It was a disaster and we never discussed it again.

Back home I found myself floundering. I wanted to do something with my life, but what? One day I came across those stories I had written so many years ago. To my surprise my mother had saved them. My love of writing was renewed.

In college I decided I wanted to be a journalist and travel around the world investigating the biggest news stories. My main interest was investigating crimes especially when a child was involved. Those broke my heart.

For the subject of my freshman English research paper I chose the Lindbergh kidnapping. The case fascinated me and I sensed that the whole thing had been bungled from the beginning. I wanted to write a book about it, but it just never all came together.

I don't remember when the idea for Willow Pond began to form in my mind. One day it was just there. It was a difficult journey and the book went through many different versions and had many different titles none of which sounded right to me. Finally the title just came to me and it felt right.

I don't believe in ever giving up on your dreams. No matter how long it takes just keep pursuing it because I think if you believe in yourself your dreams can come true. Just keep working hard and never pay any attention to the naysayers who doubt you.

Carol Tibaldi was born and raised in Bayside, New York and attended Queens College of the City University of New York. She loves to travel and has lived in London and Los Angeles. For twenty five years she worked as a newspaper reporter and covered the crime beat. She is a history bluff and loves to research different time periods having a special affinity of the prohibition era and the Civil War. Willow Pond is her first novel and she is hard at work on the sequel. 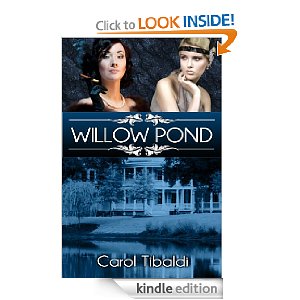 As the Roaring Twenties crumble into the Great Depression, Virginia Kingsley, New York's toughest and most successful speakeasy owner, is doing just fine; with the whole world falling apart, for so many, bootlegging is a flourishing business.

But when a former lover, Rudy Strauss, attempts to coerce his way into her business, Virginia sends him packing and her entire family pays the price: Her niece, Laura, is devastated when her infant son vanishes without a trace. Speculation and rumors abound in the media circus that follows the abduction, and the police have few leads, most of which point straight back at Virginia and her fellow bootleggers.

Suspicious of Rudy but unable to go to the police, Virginia pursues her own investigation, shaking down, threatening, and killing one petty crook after another as she races against time to find her missing great-nephew. In the mean time, Laura's lover and Herald Tribune reporter, Erich, tries to convince Laura that Virginia knows more than she is telling ... and may be behind the boy's disappearance.

With time flying past and hope thinning, Virginia, Laura, and Erich must set aside their differences and work together in one last, desperate bid to find the missing child and whoever really abducted him.

Laura lifted the damp hair from the back of her neck and stretched, hoping for some relief from the heat. Digging in a drawer, she found a barrette to pin up her hair, then glanced at the clock. It was almost noon. Laura stared at the paper in front of her, but the heat had made her as dull and lifeless as the two main characters in her novel. No matter how many times she rewrote the first chapter, the dialogue sounded flat.

What was Todd doing now? Probably playing in the water. She imagined the little boy splashing in the pond behind the mansion and smiled. Mrs. Nickerson would have taken him there to cool off.

Slumping to her room, Laura peeled off her robe and tugged on a much cooler pair of Chinese pajamas. The only possible place to sit in this heat was in front of the electric fan, which is where she went to attempt Thomas Wolfe’s new novel, Look Homeward Angel. No use. She couldn’t concentrate. She considered calling one of her girlfriends and going to a movie. One of those air-cooled theatres would feel good.

The phone rang, jarring her from her musings. Ordinarily, the sound would have irritated Laura. It interrupted her train of thought when she was writing. Today she welcomed the distraction.

At first all Laura heard was someone breathing hard on the other end, then a muffled sob. She rolled her eyes. Not again. She'd gotten a crank call a couple of days earlier and was about to hang up when Mrs. Nickerson’s hoarse voice crackled over the wire.

“Mrs. Nickerson? Is that you? What’s wrong?” Laura demanded.

“Oh dear God!” The nanny's voice rose and fell as she sobbed. “The baby’s been kidnapped!”

Posted by Kathleen Higgins-Anderson at 3:04 AM