Author Guest: David Pereda, Author of However Long The Night 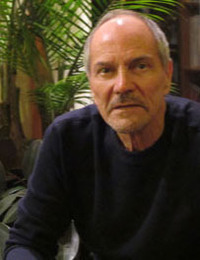 DAVID PEREDA
HOWEVER LONG THE NIGHT
Prolific author David Pereda has a new mainstream novel out this month sure to capture your imagination and question the intensity and commitment of your love life. Winner of the Lighthouse Book Award for fiction and the Royal Palm Award for fiction, However Long the Night is a sizzling Romantic tale with a major dose of suspense, a tense love triangle, shocking family secrets, disgusting corporate shenanigans and a historical background.
Here’s a brief summary of the plot:
Miami Architect and successful real estate developer Cid Milan suddenly realizes his whole life has been built on a lie told by his now dying father twenty-five years ago – willfully betraying Cid’s best friend, Joaquin, sending him to prison, and forsaking his pregnant girlfriend Sandra, causing her to be thrown out of her house by her parents.  Overnight Cid’s life implodes. Trying to unravel the mystery of his own past, he realizes there’s only one thing he can do: return to the land he abandoned to right the wrongs committed.  In his quest, Cid rediscovers himself and his roots as he reunites with Joaquin and searches frantically for Sandra and the secret she’s been keeping from him all these years: his son.  In the process, Cid learns an invaluable lesson about love, forgiveness and redemption that changes his life forever.
David is an award-winning author and college writing and ESL instructor living in Asheville, North Carolina. A member of MENSA, he is the regional director of Florida Writer’s Association’s Western North Carolina division, and the founder of Asheville’s Writing Enthusiasts.
However Long the Night is published by Eternal Press and is available in local bookstores and at amazon.com, eternalpress.biz, and davidpereda.com. It is also available as an e-book and on Amazon’s Kindle format.

David Pereda is an award-winning author who enjoys crafting political thrillers and mainstream novels. His books have won the Lighthouse Book Awards twice, the Royal Palm Awards, the National Indie Excellence Awards, and the Readers Favorite Awards. He has traveled extensively around the world and speaks several languages. Before devoting his time solely to writing and teaching college-level courses, Pereda had a rich and successful international consulting career with global giant Booz Allen Hamilton, where he worked with the governments of Mexico, Venezuela, Peru, and Qatar, among others.


A member of MENSA, Pereda is the regional director of the Florida Writers Association and the co-founder of AWE (Asheville Writing Enthusiasts). He loves sports and has won many prizes competing in track and show-jumping equestrian events.


Pereda lives with his family in Asheville, North Carolina.

BUY THE BOOK: However Long The Night
AMAZON
BARNES & NOBLE

Book Description: However Long The Night
What if you found out your success was built on lies told by your father that caused great misfortune to people dear to you? What if you had the opportunity to do something about it ... twenty-five years later and at the risk of your life? Would you or wouldn't you?
This is the dilemma award-winning Miami Architect Cid Milan suddenly faces in this 90,000-word, mainstream novel. A Cuban immigrant forced to abandon his country as a teenager during the tumultuous Mariel boatlift of 1980, Cid is a self-made man who arrived in the United States with nothing. He's an example of what can be accomplished in America through hard work and determination. He hobnobs with the Mayor, has a sexy model for his girlfriend, and is building the most luxurious condominium on Biscayne Bay. But when his dying father, Colonel Jose Milan, a well-known political dissident, confesses to him a shocking family secret from Cuba, Cid's life implodes.
Colonel Milan reveals that in order to ensure Cid could leave Cuba unharmed, he collaborated with Castro's police - willfully betraying both Cid's best friend, Joaquin, and forsaking his pregnant girlfriend Sandra. Overnight, Cid's world is turned upside down. Trying to unravel the mystery of his own past, Cid realizes there's only one thing he can do: return to the land he abandoned. In his quest to learn the truth, Cid rediscovers himself and his roots as he reunites with Joaquin and searches frantically throughout Cuba for Sandra and the secret she has kept from him all these years: his son. In the process, Cid learns an invaluable lesson about love, forgiveness and redemption that changes his life forever.
Book Excerpt: However Long The Night
Cid’s mother leaned on the rail next to him. She wrapped an arm around his waist and hugged him tenderly. “How are you doing, Son?”
Cid looked into her soft brown eyes. “Fine, Mama.”
“I know you. You’re not fine at all. You always try to be so tough, but you’re not. Manny is like your father. They see life one way, like bulls. You’re like me. We feel every little emotion, because we care. So I know you’re not fine. You’re hurt.”
His eyes filled with tears. “She doesn’t love me, Mama. She didn’t come.”
“Maybe she had a reason for not coming, Son.”
“No, Mama. I tried talking to her for days, and she disappeared on me. It was as if she was angry about something. It was her way of breaking up with me.”
“Give her a chance. Call her from Tampa and listen to her explanation. You can always send for her.  Maybe even come to get her.”
“I will, Mama. But deep down I know she doesn’t love me anymore.”
“Why do you say that?”
“I remembered something she said to me once. She told me, looking at me with those beautiful hazel eyes of hers, ‘Cid, the day you don’t love me anymore, don’t tell me. I don’t want to be hurt. Just go away and disappear. I’ll understand.’” A tear rolled down Cid’s cheek, and he wiped it away with the back of his hand. “And that’s what Sandra did, Mama, you see? She disappeared.”
They watched the Cuban coast in silence, gold and green and blue. A cool breeze replaced the strong wharf odor with the briny smell of the open sea.
After a while, Cid noticed his mother was crying. “What’s wrong?”
“Don’t mind me. Just an old lady’s tears.” Her gaze was fixed on the receding coastline. “She’s beautiful, isn’t she?”
“Si.”
“I’ll miss her.”
“Me, too.”
However Long The Night Virtual Event Contest: Win A $20 Amazon Gift Card!
To enter the contest, click the above link and post a comment on David's Tour Page on Goddess Fish Promotions to win a $20 Amazon gift card! Don't forget to leave a comment for David below too! 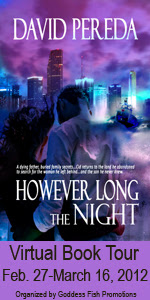 Posted by Kathleen Higgins-Anderson at 3:39 AM