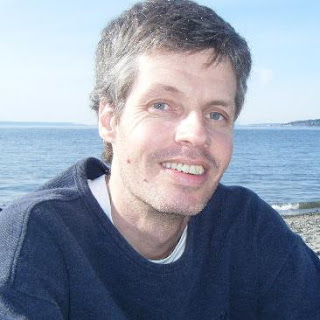 Erik Atwell started his writing career in grammar school, when a one page history class assignment ballooned into a forty page fictional account of a politically controversial silversmith in Boston circa 1776. From there, he wrote short stories while living in New Hampshire, screenplays upon moving to Los Angeles, then finally novels when he landed in Seattle. He now lives in Seattle with his rock star wife and his six-month-old son, whose only musical claim to fame thus far is sleeping through an entire Go-Go's concert. But in his defense, he was three weeks old, and the stage was a quarter-mile away. Thank You For Flying Air Zoe is his first novel, and he hopes to write a second novel before the little guy treks off to college.


Disclaimer: At the request of the author, publicist, publisher and Chick Lit Plus, a Kindle edition of the book was sent, at no cost to me, for my honest review and participation in the virtual book tour event.

To enter the contest, click on the above link and leave a comment on Erik's tour page to win a $10 Amazon gift card! If you purchase your copy of Thank You For Flying Air Zoe before February 20 and send your receipt to Samantha@ChickLitPlus.com , you will get five (5) bonus entries!


Ladies and Gentlemen, the Fasten Seat Belt sign has been turned on, but feel free to ignore it, because sometimes life is best lived on its dizzy edges. Your cruising altitude today will be sky high, and you will be flying at staggering speeds as you travel alongside Zoe Tisdale, former Valley Girl and rock star turned bored butter saleswoman.

On the heels of a brush with mortality, Zoe concludes that she's been letting time pass her by. Realizing she needs to awaken her life's tired refrains, Zoe vows to recapture the one chapter of her life that truly mattered to her - her days as drummer for The Flip-Flops, a spirited, sassy all-girl garage band that almost hit the big time back in 1987. But reuniting the band won't be easy. The girls who were once the whiz kid guitarist, the prom queen bass player, and the hippie lead singer grew up and became women who are now a reclusive dog trainer, a wealthy socialite, and a sociopathic environmentalist. Will Zoe bring the band back together and give The Flip-Flops a second chance at stardom? Is it possible to fully reclaim the urgent energy of youth?

As you follow this wild flight path, please know that your destination could be anywhere at all, complimentary oxygen is provided upon request, and baggage flies free. We hope you enjoy the ride, and Thank You For Flying Air Zoe.


If you had a near death experience and saw your life flash before your eyes, and you realize that all you have been doing with your life is just going through the motions, would you want to change it? What if during your reassessment of your life choices, you decide that you want to recapture your eternal youth, is it possible or would that just be wishful thinking? These are the questions that forty-one year old butter saleswoman Zoe Tisdale contemplated after a near death experience on a plane fight home from her vacation in Cabo San Lucas.

The near death experience during the plane flight gave Zoe plenty of time to contemplate her life and the choices she has made over the years. To her dismay, she realizes that she has wasted so many good years on a "same-old, same-old" kind of life that lacked meaning and excitement. What she realizes during her contemplation is that she wants to recapture her eternal youth of her teenage years, when she belonged to an all-girl garage band, The Flip-Flops, with her 3 best buddies, Lauren, Ginger and Melinda. So when the organic butter company that she works for is sold and she is demoted, she decides to resign from the company and go after her dream of reuniting the band and play the famous Hollywood venue, Whisky A Go-Go. There is just one problem, Lauren and Ginger are sisters who haven't spoken / gotten along with each other in years, and Melinda is a crazy tree-hugging environmentalist who is currently staging a protest and living in a tree. These little speed bumps aren't going to slow Zoe's mission down, she's bound and determined to have "Operation Flip-Flop" succeed, so come along for the ride on Zoe's journey, where the hostess will gladly say Thank You For Flying Air Zoe!

Thank You For Flying Air Zoe is a humorous fast-paced story that will keep you in stitches. The storyline was intriguing, I was curious to see how a male author would create a story utilizing the first person narration of a woman, and I was pleasantly surprised with how well the author understands a woman's perspective.The characters were so much fun to get to know, these zany but lovable ladies kept me laughing as I read about their crazy antics. I couldn't help but shake my head and think that they were all just a tad bit looney tunes. As a girl whose teenage years were from the late 70's to mid 80s, I absolutely loved how the author utilized that musical decade, and found myself taking a stroll down memory lane and yearning to hear some of the Go-Gos and Bangles tunes ... geez I had the songs "Walk Like An Egyptian" and "Manic Monday" playing over and over in my mind ... thanks Eric ... geez ... *rolls eyes.* I couldn't help but roll my eyes at Zoe's very apparent mid-life crisis and wishful thinking of recapturing her eternal youth, but then I thought about it and realized that doesn't everyone at sometime in their life contemplate their own life and take a stroll memory lane too? The only difference is that unlike Zoe, the ability to recapture your eternal youth just isn't a reality, just wishful thinking for most people. In any case, I found myself cheering Zoe on as she went on her journey of rediscovering herself, and it gave me food for thought about contemplating my own life choices that I have made in my 40-something life!

I would recommend Thank You For Flying Air Zoe, it is a fun and light-hearted story that will make you laugh and smile while encouraging you to take a stroll down your own memory lane as you reminisce about your life.