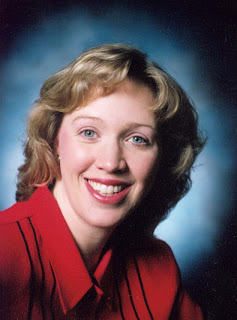 Ten Things That Readers Don't Know About Me
By: Laurie Larsen


Hey Jersey Girl, thanks so much for hosting me today on my blog tour for my latest contemporary romance, Keeper by Surprise. The topic (Ten Things Readers Don’t Know About Me) is appropriate for promoting this book, because I’m sure my hero, Keith Hanson wished he knew ten more things about his heroine, Lisa Carle. At least he’d be going into their romance with his eyes wide open. But, as they say, all’s well that ends well, and of course, Keith and Lisa ultimately got their Happily Ever After.

So, without further delay, here are ten things that readers might not know about me … and I’ll say I struggled to find ten ‘interesting’ things about myself, but here goes:

TEN: I’m musical. When I was a kid I played five musical instruments: flute, piccolo, bassoon, baritone saxophone and guitar. Often I’d learn a new instrument just because a certain band or ensemble lacked one. I also wrote a few songs which was great fun.

NINE: Now, however, I spend all my musical talents on singing. I sing in the church choir, often do solos and have done more weddings than I can count. I started an exercise to see how many couples I sang for are still married, but they weren’t faring well, so I quit counting.

EIGHT: As a child, I rode horses. I competed for five years and rode English hunt seat, and yes, even did stadium jumping. Steeplechase jumping scared me half to death.

SEVEN: I spent a semester in Mexico City as a college student. I was an English major and Spanish minor. There was a time when I could hold my own speaking Spanish pretty fluently. Now, I only get the chance on the odd Mexican vacation. I can still form my own sentences but have trouble translating when native Spanish speakers talk to me.

SIX: I am the granddaughter of one of the inventors of the solar battery: Gerald Pearson, my mom’s dad. He worked for Bell Labs at the time and the invention was made on a team with several other brilliant scientists. My mom a few years ago accepted my grandfather’s induction into the American Inventor’s Hall of Fame. Unfortunately I did NOT inherit his brilliant scientific mind.

FIVE: I’ve worked for the same Fortune 50 company for 28 years!! I’ve enjoyed (almost) every job I’ve ever held there and I’ve always been proud of the accomplishments of the company. But I have to admit that I also love to dream about an early retirement so I can spend my time doing other things besides sitting in an office all day long.

FOUR: I’m an E! network junkie. When I’m channel surfing I go automatically to E! and if any of the following shows are on, I usually stay there: E! News, Keeping Up With the Kardashians, Sex and the City reruns, The Soup. If none of those shows are on, I’ll flip to TBS for old sit coms in syndication, CMT for country music videos or History Channel for episodes of Pawn Stars.

ONE: I consider myself one of the luckiest and blessed people in the world, thanks to God.

Laurie Larsen is the EPIC Award-winning author of Preacher Man, Best Spiritual Romance of 2010. To date, she has published seven books in the romance and women’s fiction genres, including one Young Adult romance. Keeper by Surprise is her latest release. She lives in the Midwest with a strenuous day job, a husband of more than two decades, two amazing sons and Gracie the Wonder Dog.

A Basic Nook or Kindle

Laurie will be awarding promo items to random commenters at every stop, and the choice of a basic Nook or Kindle to one randomly drawn commenter during the tour (US/CANADA ONLY). 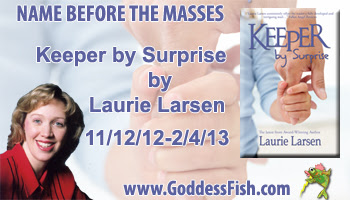 Disclaimer: I received a copy of the book from the author / publisher in exchange for my honest review and participation in a virtual book tour event hosted by Goddess Fish Promotions.

Life changes forever for Keith Hanson when his parents’ will declares him guardian over his three younger siblings. His new responsibilities are challenging, but he’s even less prepared to fall in love with Lisa Carle, a social worker with a devastating secret.

College student Keith Hanson’s priorities are like any other 20-year old guy’s: grades and girls, not necessarily in that order. But when his parents are killed in a tragic car accident on their way home from visiting him at school, life changes drastically. He’s stunned to find that his father’s will calls for him to become guardian to his siblings, fifteen year-old Dana and twin seven year olds, Leo and Linda.

The new keeper comes to the attention of Family Services when Dana’s rebellious ways prove more than he can handle. She disappears and Keith finds her in her boyfriend’s driveway inside a foggy-windowed car. Social worker Lisa Carle is assigned to the Hanson case to help with the adjustment and is floored by her unexpected feelings for Keith. But neither Keith nor Lisa are fully aware that they have unwittingly become pawns in a plot led by Lisa’s boss, that will ultimately lead to their destruction or their own happy ending.

Keith pulled up in front of the Alpha Chi Omega house and parked. He tugged at the torturous bowtie and started up the sidewalk, then trotted up the steps to the massive front door. Once inside the sorority house, he gazed around the extravagant foyer. The walls were lined with scarlet velvet and the plush carpet was olive green. A huge vase of red carnations sat on the circular table occupying the center of the foyer. The house had always seemed to him like a metaphor for the girls who lived inside. Beautiful, classy, and just a tad out of his reach.

A movement at the top of the stairway captured his attention. Carly. He turned and his breath caught in his throat. He knew he was gawking at her as she began to descend the stairs. He couldn’t help it. She was gorgeous. She stepped gracefully onto the massive staircase and paused to giggle at his reaction.

My God, that dress. It was absolutely perfect on her. The emerald color gave her a regal look and it was form-fitting in all the right places. Like her breasts. And her tiny waist. Her auburn hair fell in graceful curls around her shoulders. As she reached the bottom of the stairs, she turned away from him to brush the floor-length skirt and he caught a glimpse of the back of the dress. His heart quickened when he saw how low-cut it was. Her entire back was exposed in a V pattern, leaving absolutely no doubt in his mind there was no barrier between her skin and that fabric.

“Your mouth is hanging open, you know.”

How would you feel if your world suddenly turned upside down when tragedy strikes and you go from being a carefree college kid to the guardian of your younger siblings?

For Keith Hanson, a fatal car accident that took his parents lives will change his life forever when he finds out that their will has made him the guardian over his fifteen year old sister Dana and seven year old twins Leo and Linda. How does one go from being a college student to being a parent of three? Is Keith up for the challenge, or will this daunting responsibility prove to be too much for him?

Keeper by Surprise is a poignant story of one young man's challenge to become a parent to his three younger siblings after a tragic car accident takes the lives of his parents. Written in the third person narrative, author Laurie Larsen weaves a poignant tale of heartbreak, reality, growth, responsibility and resilience that will simply pull at your heart strings. The daunting challenges that Keith faces in his journey to provide a stable family dynamic for his siblings provides enough twists and turns that engages the reader's emotions. And with young social worker, Lisa Carle, Keith finds a new romance that blossoms along the way, until a deeply held secret by Lisa threatens to destroy them.

Keeper by Surprise is a warmhearted story written with thoughtfulness and a dose of reality. Author Laurie Larsen does a wonderful job of weaving a tale of love of family with a tender romance in the mix. This coming of age and ready made family story demonstrates the resilience of love to overcome life's challenges, and that love really does conquer all. 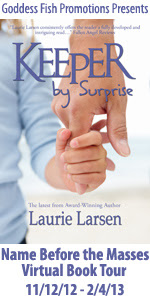