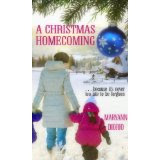 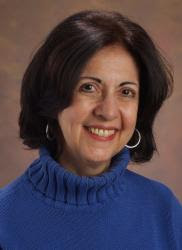 Dr. MaryAnn Diorio loves God, people, children, and dogs, in that order. She also is passionate about story and its power to transform the human heart. Dr. MaryAnn, as she is affectionately called, writes compelling fiction that deals with the deepest issues of life. She is Adjunct Online Professor of Fiction Writing for Regent University and coaches writers on their journey to publication. MaryAnn and her husband Dominic are the blessed parents of two wonderful daughters and a fantastic son-in-law.

Grab a copy of MaryAnn Diorio's "A Christmas Homecoming" for JUST .99! MaryAnn is celebrating by giving away a Paperwhite Kindle! Details below!

One "merry" winner will receive:
Enter today by clicking one of the icons below. But hurry, the giveaway ends on December 22nd. Winner will be announced on 12/23/12 at MaryAnn's Blog.

Disclaimer: I received a copy of the book from the author / publisher in exchange for my honest review and participation in a virtual book tour event hosted by Litfuse Publicity.

Seven Christmases have passed since Sonia Pettit last heard from her daughter Jody. Since Jody’s departure, Sonia’s world has been turned upside down. Her husband has died of a broken heart, and her son, bitter over his sister’s destructive actions, has become rebellious.

Her greatest desire is to have her family together at Christmas, but after what Jody has put them all through, can Sonia truly forgive her daughter?

Jody Pettit O’Dair ran away to experience a life of adventure and excitement, but since her departure, her world has been turned upside down. She’s been abandoned by the man she met and married, lost her job, and is unable to care for her two children. With nowhere else to turn, this prodigal daughter begins the long journey home and prays she will be welcomed after walking away so long ago.

Will Jody find forgiveness in the arms of her family as easily as she received it from God?

Sonia Pettit pressed her hand against her chest in a vain attempt to ease the gnawing, endless ache in her heart. In a few short days, she’d mark the seventh Christmas since her daughter’s frightful disappearance. A sudden, unannounced, and, worst of all, voluntary disappearance with no explanation, no sense, and no forwarding address. A disappearance that had incinerated Sonia’s soul and left it a cold heap of ashes.

Outside the living room window, autumn had long since passed, leaving behind bare branches, scrawny bushes, and gray-white skies. A soft snow fell, dusting the yellowed lawn of the 1920s Victorian home she and Rick had purchased as newlyweds twenty-nine years earlier. The home in which they’d raised their children.

But those early happy times had turned into a nightmare.

She leaned her forehead against the windowpane, her eyes searching far into the distance. More times than she could count, she’d riveted her gaze on the sidewalk leading up to the house, hoping against hope her daughter would suddenly appear. But each time, Jody’s imaginary figure would evaporate into nothingness.

Sonia blinked back the stinging tears. Truth be told, some days worry clawed at her, tearing her heart to shreds. But there were other days, just as wrenching, when rage gripped her to the point she never wanted to see her daughter again. Like a scorching iron, raw pain seared the edges of her memory, leaving only blame to vent the hurt.

After all she’d done for her child. To have Jody leave without warning, without saying good-bye, without so much as an “I’ll be in touch, Mom.” Nothing. Just cold, heartless rejection fueled by arrogance and ingratitude that bordered on the cruel. A vicious slap in the face to a mother who’d given her life for her children.

Sonia turned at the hissing sound coming from the kitchen. She rushed to the stove where her soup had boiled over. She reached the pot just in time to remove a rattling lid from its precarious perch. A small puddle of homemade chicken soup covered the gas burner. She turned off the gas and moved the bubbling mixture to a back burner. Then she took the dishcloth hanging on the faucet and carefully wiped up the mess just as Ben walked into the kitchen.

“Morning, Mom.” Ben scratched his disheveled head in a valiant attempt to jerk himself to wakefulness. “Got any coffee?”

Sonia pushed down her anger and forced a smile at her lanky twenty-two-year-old son. The second-born of her womb. The son with the tender heart gone awry. “Just made a fresh pot. I’ll pour you some.”

“Thanks.” He yawned. “I’m not awake enough to pour it myself.”

She took a large blue mug from the cupboard and held it in her left hand while she poured coffee into it with her right. She handed the mug of steaming brew to Ben. In a few months, he’d be graduating from college and moving right into a job with a local accounting firm.

His father would have been proud of at least one of their two children.

She squelched the painful memories. Christmas was coming, and she needed to put on a smile for Ben, if not for herself.

“So how’s my favorite son this morning?”

Ben sat down at the kitchen table and stretched out his long legs. “Come on, Mom. You know I’m your only son. So why call me your favorite?”

She sat down in the chair next to him. “Because you are. You don’t have to be my only son to be my favorite one.”

He grinned. “But what if you had another son, would I still be your favorite?”

“Of course, you would. It has nothing to do with numbers. No matter how many children I had, each one would be my favorite—you and Jody hold an equal place in my heart.”

His eyes narrowed. “You can say that after what she did to our family?”

Sonia shifted in her chair, her thumb outlining the handle on her coffee mug. “Yes.” Her breath caught on a snag of hesitation. “Yes, Ben.” She looked him in the eye. “I can still say that.”

He slammed his coffee mug on the table, splattering the hot liquid all over the green vinyl tablecloth. “She ups and leaves without telling anyone where she’s going. Just a stupid note that says, ‘I’ve gone. Don’t come looking for me. I need my space.’ Her space? Sounds more like her own selfish way to me.” He raked his fingers through his hair. “Seven years! How many private investigators and how much money have you spent on finding her?” He stood. “You should have listened to Dad. Let her go. Don’t try to find her. He never forgave her, you know.”

“What makes you think Dad didn’t forgive her?”

“How could he? Look at the hole she left in his heart—a hole that devoured him and sent him to an early grave.” He looked beyond her, peering out the window. “A hole that would swallow me up if I let it.” He shook his head. “But I won’t. My anger against her is all I have to keep me from falling in.”

He towered over her, fire in his eyes. “Who are you to talk? You haven’t forgiven her either. You just pretend you have.”

She lowered her voice, tamping down the anger threatening to spew forth. “Forgiveness is a decision, not a feeling.”

The sword of truth pierced Sonia’s heart as she watched Ben storm out of the room. If she were honest with herself, he was right. She hadn’t truly forgiven Jody either. As much as she loved her daughter, Sonia wanted Jody to suffer as much as she herself had suffered. As much as Rick and Ben had suffered. She wanted Jody to pay for all the pain she’d caused. By walking out on her family, Jody had left a wake of anger, confusion, and shame that had rocked their world, leaving them bruised, shaken, and shattered. Worst of all, Rick had taken his daughter’s disappearance so hard that Sonia was sure it had caused his death. How could she ever forgive Jody for that?

She rose and turned her attention back to the soup pot. She lifted it from the back burner and replaced it on the front one, then turned the gas to low heat. Chicken soup made a good lunch on a cold day.

But on this cold day, she no longer had an appetite.

A Christmas Homecoming is a poignant novella about God's gift of grace, forgiveness, healing, faith and redemption to a family that has been struggling through unfortunate life circumstances for the past seven years. Written in the third person narrative with alternating perspectives from a mother and a daughter, author MaryAnn Diorio weaves an inspirational tale of the beauty of God's grace and the power of forgiveness that brings a family back together, on the road to healing and becoming whole once again.

At the age of eighteen, Jody Pettit O'Dair runs away from her home in Falls Church, Virginia, to experience a life of adventure and excitement in Sydney, Australia. She left her family without even saying goodbye, leaving just an impersonal note telling them not to look for her. Now seven years later at the age of twenty-five, Jody realizes that her life of adventure and freedom has instead brought only heartache and trouble. Divorced and left penniless with three year old twins Micah and Greta, she is laid off from a job she hated but desperately needed. With nowhere else to turn to, can Jody go back home to her family in Virginia? Will they forgive her for her selfish actions and the pain that she has put them through? Will they welcome her back into their family?

For seven Christmases, Sonia Pettit has prayed for the safety and return of her daughter Jody. Jody's unexplained disappearance has turned Sonia and her family's world upside down. After twenty-nine years of marriage to her husband Rick, he took Jody's disappearance so hard, he developed a heart condition and withdrew from the world as bitter man whose heart gave out, only to die from a broken heart. And their son Ben, who was fifteen years old at the time of Jody's disappearance, is now an angry, bitter and rebellious twenty-two year old. With everything that Jody has put the family through, can Sonia open her heart and forgive her daughter, and welcome her back into the family?

My favorite quote in the story is one that sends a powerful message for everyone to follow: Sonia tells her son Ben that "forgiveness is a decision, not a feeling." No truer words could have been written!

A Christmas Homecoming is a beautifully written and heartwarming story that will stir your soul. This is an emotional story that provides a wonderful message that will resonate with the reader for a long time, especially during the Christmas holiday season.

Posted by Kathleen Higgins-Anderson at 8:54 PM