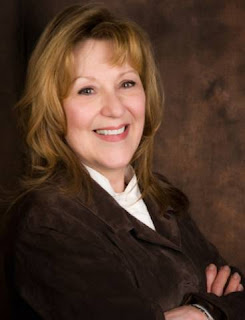 I'm convinced that first responders are not like the rest of us.

Whether cloaked in the uniforms of soldiers, firefighters, police officers, or EMTs, something inside enables each to silence doubt and fear and plow through danger to protect those who were not blessed with the trait. I am one of the Unblessed. To prove it, let me share a true story:

One dark, starless night, several dozen family members gathered around our campfire, whispering about reports that a mountain lion had been spotted in the area. My brother-in-law excused himself to use the facilities, and, true to his always-joking nature, tiptoed up the hill. When he crashed through the underbrush, growling like a grizzly, adults scattered like ashes in the wind. As our wide-eyed, S'mores-sticky kids said "What's going on!", we - the parents assigned to protect them - huddled on the cabin porch and faced the ugly truth: We could never again claim "I'll lay down my life for my children!"

While interviewing nearly 200 first responders who served on 9/11, I heard nearly 200 variations of the same story ... and 200 ways of saying what this New York City policeman said: "I didn't give a thought to what might happen to me. I just wanted to get to my buddies, no matter what it took." He lost four fingers, digging through the smoking debris in search of his comrades. During my interview with one of the paramedics who carried the dead and dying to waiting ambulances, one said "I don't consider myself a hero ... just a guy doing what anyone else would do under the same circumstances."

No, not "just a guy doing his job," I argued. And although I told my campfire story to underscore that truth, he still didn't get it. What more proof did I need to shore up my belief that first responders really aren't like the rest of us! Is it possible, I wondered, to show them how much we, the Unblessed Cowards, appreciate the matter-of-fact way they gear-up and stride nobly into the line of fire?

The First Responder series is my answer to that question, and I pray that every reader comes away with newfound respect and admiration for those who take John15:13 a step beyond its meaning: "Greater love hath no man than this, that he lay his life down for his friends."

How much greater is the gift of the brave men and women who humbly live those words daily ...

With nearly four million 4- and 5-star books in circulation, reviewers and readers alike have called best-selling author Loree Lough “a gifted storyteller whose novels touch hearts and change lives.” The 3rd novel in her popular First Responders series, A Man Of Honor (Loree’s 88th published book), reaches bookstore shelves this September. Loree and her husband live in the Baltimore suburbs and love spending time at their tiny cabin in the Allegheny Mountains, where she loves to show off her “i.d the critter tracks” skills. She loves to hear from readers (who can email her via http://www.loreelough.com) and answers every letter, personally.

A Man Of Honor Book Trailer 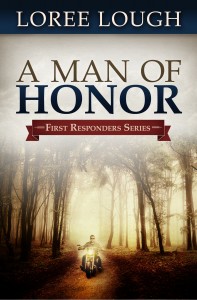 Disclaimer: I received a copy of the book from the publisher in exchange for my honest review and participation in a virtual book tour event hosted by Pump Up Your Book! Virtual Book Publicity Tours.

Dusty and Grace find love together, but will it be enough to pull them through tragedy?

On a steamy spring morning, Dusty Parker—part-time pastor, part-time search and rescue team leader, and full-time administrator at a school for troubled boys—joins the search for a missing teen girl. He partners with volunteer and inner city school teacher Grace Sinclair, and what they find bonds them in ways neither could have expected.

As they begin to build a life together, a visitor from the past causes Dusty and Grace to further open their hearts and home.

But a dark and dangerous threat looms over their seemingly perfect world, and in one terrifying night…

Dusty stifled a yawn and deployed the Harley’s kickstand. Grumbling under his breath, he stowed his helmet, and, after squeezing rain from his ponytail, pulled up the rain-soaked hood of his sweatshirt.

A fat raindrop oozed from a leaf and landed on the tip of his nose, then slid to the blacktopped footpath, where it gleamed like a new dime. Up ahead, the red and blue strobes of emergency vehicles sliced through the gray mist, and the whoop of sirens silenced the usual chirp of tree frogs and crickets. If that didn’t lend gritty balance to the postcard-pretty scene, Dusty didn’t know what did.

Melissa Logan, age sixteen, hadn’t been home since the night of her prom. Last seen a few miles west of the her high school, her disappearance had sparked an intensive dusk-to-dawn manhunt that left everyone scratching their heads. And this morning, when a jogger’s German shepherd started acting spooky, the dominos began to fall…starting with its owner’s 9-1-1 call and ending with another search, here at Gunpowder State Park.

“It’s been nearly a week since she went missing,” Jones warned, “so prepare yourselves.”

Dusty Parker is a part-time pastor, part-time SAR member, and administrator of Last Chance, a school for troubled boys.

When one of Grace's students, teenager Melissa Logan goes missing during her prom, Grace volunteers in the SAR and is partnered with Dusty. Both Grace and Dusty have troubled pasts, and as they work together on the SAR, they form a bond and find love, but one terrifying night will test the strength of their love and could change everything.

A Man Of Honor is the third book in the First Responders Series, and just when you think the series can't get any better, author Loree Lough pulls out all the stops! Masterfully written in the third person narrative, this is so much more than your ordinary romance story, it is about real life situations and the amazing lives and dedication of First Responders. The author masterfully weaves a tale that engages the reader to follow Grace and Dusty's journey, it has enough romance, drama, suspense, twist and turns that keeps the reader sitting on the edge of their seat. It is a story that will take the reader on an emotional roller coaster ride, it will make you laugh, cry, and pull at your heartstrings.

The author has a wonderful way of creating a strong cast of characters who are realistic, complex and engaging people. She creates characters who are not perfect, they have flaws like we do, they are easy to relate to and connect with, and you can't help but get drawn into their lives. I absolutely loved following along Grace and Dusty's journey, their emotional pasts and admirable professions touched my heart, they were an interesting couple that kept me engaged and interested. With a quirky supporting cast of characters, engaging dialogue and riveting interactions, A Man Of Honor is a story that is a very powerful and compelling read.

A Man Of Honor is simply a beautiful, inspirational and powerfully compelling story that will resonate with you long after the last words have been read.

Posted by Kathleen Higgins-Anderson at 12:04 AM