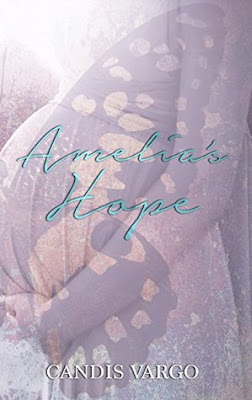 
Disclaimer: I received a copy of the book from the author / publisher in exchange for my honest review and participation in a virtual book tour event hosted by Reading Addiction Book Tours.


“Even though I was decaying, Amelia was growing. It was like some beautiful symphony the way both things were happening at once.”

Sacrificing your life for your child is one of the greatest ways a mother can show her love. For Cara Michaels, that sacrifice was made.

At ten weeks pregnant, Cara was diagnosed with a fast-acting cancer and was faced with the ultimate decision… That decision, was to forgo life-saving treatment to ensure her child would come into this world unharmed.

Cara shares with us the last months of her life as she prepared to give birth to her child and for her husband, Joel, to parent without her.

But a husband can only handle so much before he breaks…

Grab your tissues because you're in for heartbreak.


Amelia's Hope is a compelling and emotional story that follows Cara Michael's story as her world is turned upside down when she is diagnosed with Acute Myeloid Leukemia on her tenth week of pregnancy, and the difficult decision that she makes to sacrifice her life by forgoing chemotherapy in order to give her unborn baby life.

Author Candis Vargo weaves a heartbreaking story told in the first person narrative, as Cara takes the reader along on the last few months of her heart wrenching journey, and how this unexpected tragedy completely devastates her husband Joel.

I found myself captivated by this story, it took me on a roller coaster ride where I felt the full gamut of emotions. You just can't help but feel compassion and empathy for Cara and Joel as their world is turned upside down by the traumatic diagnosis that completely shattered their dreams except for the little miracle that was growing in Cara's tummy. This is a beautifully written story that easily draws the reader in from beginning to end. It is a thought provoking and emotional story of a mother's undying love for her unborn child, and a husband's unfathomable sorrow and emotional attempt to pick up the pieces and move forward that will simply tug at the heartstrings and stir the soul.

Amelia's Hope is a powerfully emotional women's fiction story that will break your heart, and stay with you long after the last word has been read.

Growing up on an old dirt road in the middle of nowhere, as a child Candis Vargo used her love for books as a way to escape reality (and her brother constantly trying to kill her--literally). She blames her love of all things Horror on being born on Friday the 13th and will always find joy in scaring her friends.

You will find a little piece of her in every book she writes. She loves a good happy ending but isn’t afraid to keep her stories real, even if that means telling the side of a story most people are afraid to tell.

Never caring for the norms or boundaries, Candis has written several genres from Horror to Erotica.

When she's not writing or reading, she can usually be found chasing her children around or binge watching Netflix. She currently lives in Rome, Pennsylvania with her husband and three children.

Click on the above link for the tour schedule.

The Lost And Found Bookshop by Susan Wiggs

The Sweeney Sisters by Lian Dolan