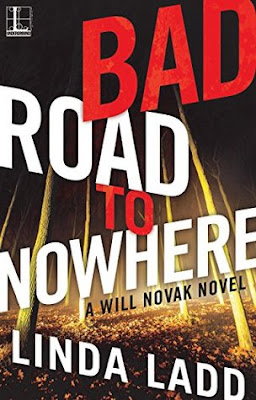 Not many people know their way through the bayous well enough to find Will Novak’s crumbling mansion outside New Orleans. Not that Novak wants to talk to anyone. He keeps his guns close and his guard always up.

Mariah Murray is one selfish, reckless, manipulative woman, the kind Novak would never want to get tangled up with. But he can’t say no to his dead’s wife sister.

When Mariah tells him she wants to rescue a childhood friend, another Aussie girl gone conveniently missing in north Georgia, Novak can’t turn her down. She’s hiding something. But the pretty little town she’s targeted screams trouble, too. Novak knows there’s a trap waiting. But until he springs it, there’s no telling who to trust...

Linda Ladd is the bestselling author of over a dozen novels. Head to Head marked her exciting return to publishing with a debut thriller after almost a decade's hiatus. Linda makes her home in Poplar Bluff, Missouri, where she is at work on her next novel. Bad Road to Nowhere is the first in a new series featuring Will Novak.

This is a rafflecopter giveaway hosted by Partners In Crime Virtual Book Tours for Linda Ladd and Kensington Publishing Corp. There will be 5 US/CANADA winners of one (1) eBook copy of Bad Road to Nowhere by Linda Ladd. The giveaway begins on December 7th and runs through December 14th, 2016.

The Lost And Found Bookshop by Susan Wiggs

The Sweeney Sisters by Lian Dolan