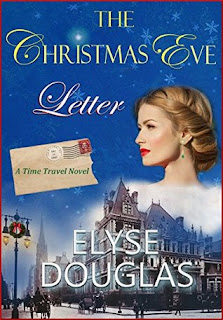 Disclaimer: I received a copy of the book from the author / publisher in exchange for my honest review and participation in a virtual book tour event hosted by Reading Addictions Virtual Book Tours.

30-year-old Eve Sharland is browsing a Pennsylvania antiques store when she discovers an old brass lantern tucked away on a shelf. It attracts her. She picks it up and sees something behind one of the sooty glass panes. She gently lifts it and, to her surprise, she finds an unopened letter stuck inside.

Eve promptly purchases the lantern and the letter, and returns to her New York City apartment. Later that evening, she carefully opens the letter and reads it, astounded by its contents. She stares at the lantern in wonder and alarm, deeply moved by the story of a tragic romance.

A few days later, following a request in the letter, Eve cautiously lights the lantern. To her utter shock, she finds herself in the past—in 1885 New York City. Eve is thrown into a life far beyond what she could have ever imagined, as she gets involved with one of the richest families in New York City, and meets the handsome Patrick Gantly. She must struggle to survive and return to her own time, even as her destiny is changed forever.


Excerpt 1
Standing next to an old typewriter was a lantern.  Why Eve was drawn to it, she didn’t know.  She angled toward it, reached, grabbed the ring handle and lifted it, surprised by its weight.  She stepped back and blew off a layer of dust, holding the lantern away from her as she examined it.  It was 12 inches high and made of iron, with a tarnished green/brown patina.  It had four glass window panes with wire guards, and an anchor design on each side of the roof.
Eve stared in rapt fascination.  She liked the sturdy feel of it and she liked the design.  It was elegant and old—wonderfully old.  Where had it come from?  Who had owned it?  How did it get to Granny Gilbert’s little broken-down shop?
Eve decided to try to slide one of the panes open to look inside.  With a gentle push up, a panel opened.  Eve spotted something inside, blocking the wick.  She moved back toward the light to get a better look.  To her utter surprise, she saw what looked like an envelope wedged behind the pane.  Intrigued, she lifted the lantern, peered in and tugged at the edge of the envelope.  With a little effort, it slid out.  It was a cream-colored envelope, glazed with dust and soot.
Eve found a tissue and wiped the dust away.  But why would an envelope be wedged into an old lantern?  Excited, she turned the envelope over to see the addressee.  When she read the name and address, she gasped.  It was impossible!  She narrowed her eyes and read again but the letters seemed to swim around on the page.  Eve drew back and dropped the envelope.
“Everything all right?” Granny Gilbert called.
Eve stood in shadow, frozen, staring down at the letter, now illumined by a stray shaft of morning sun.  The minutes ticked by.  Reluctantly, slowly, carefully, as if it might bite her, Eve leaned and picked up the envelope and straightened.  With a pained expression, she read the address again.  It was hand addressed, written in a beautiful calligraphy script, to Evelyn Sharland in New York City.
That was Eve’s name!  Sharland was her maiden name—she’d never taken Blake’s last name.  The letter was addressed to her! A shiver ran up her spine.  She swallowed hard.  She saw a 3-cent stamp with a profile of George Washington she’d never seen before.  To her complete astonishment, she also saw that the postmark circle read New York, New York Main Post Office, , .

The Christmas Eve Letter is a wonderful Christmas story that will get you into the holiday spirit. The authors weave an intriguing time travel holiday romance tale written in the third person narrative, that follows Eve Sharland's personal journey between the present and the past.

While on vacation in Pennsylvania, Eve finds an old brass lantern in an antique shop with an unopened letter inside. The letter is postmarked December 24, 1885 and addressed to an Evelyn Sharland from New York! Eve purchases the lantern, and when she returns home to New York City, she opens the letter and is moved by its tragic romantic content. As requested in the letter, Eve lights the lantern and suddenly finds herself transported back to New York City in December 1885. Eve's journey of personal discovery will teach her to deal with her own issues, while finding romance with a wealthy and handsome gentleman named Patrick Gantly. Will Eve's journey into the past help her move forward in the present?

Set in the picturesque holiday setting of New York City, the reader is easily drawn into this fast paced time travel holiday romance story as they follow Eve's journey between the past and the present. The reader can easily envision both the present and the past among the city's famous landmarks, and easily get drawn into the city's joyous sights and sounds of the holiday season. You can't help but relate to Eve and cheer her on as her personal journey brings an unexpected destiny that will change her life forever. I really enjoyed the intertwining of a time travel tale with a holiday romance twist, the historical references were realistic, while the time travel between the present and past kept me intrigued right to the end.

The Christmas Eve Letter is a captivating time travel holiday romance story that captures the essence, spirit, and magic of the Christmas season, it will warm your heart, and leave a smile on your face. 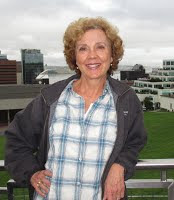 Elyse Douglas is the pen name for the husband and wife writing team of Elyse Parmentier and Douglas Pennington. Elyse's mother was a painter and her father a textile consultant. Elyse began writing poems and short stories at an early age, and graduated with a degree in English Literature. Douglas grew up in a family of musicians, astrologers and avid readers. His great grandfather lived to be a 134 years old, and was the oldest man in the world when he died in 1922.

Some of Elyse Douglas' novels include: The Other Side of Summer, The Christmas Bridge, Wanting Rita, The Christmas Diary and The Summer Diary. They live in New York City.

Click on the above link for a schedule of tour participants.

Posted by Kathleen Higgins-Anderson at 12:05 AM