You Can Have My Heart, But Don't Touch My Dog by Dixie Cash (Book Blast Event / Book Review / Contest Giveaway)

In association with Goddess Fish Promotions, Jersey Girl Book Reviews is pleased to host the book blast event for You Can Have My Heart, But Don't Touch My Dog by author Dixie Cash! 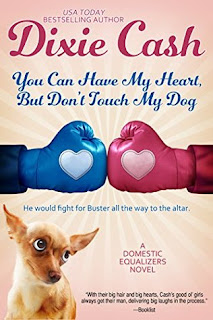 
Disclaimer: I received a copy of the book from the author / publisher in exchange for my honest review and participation in a virtual book blast event hosted by Goddess Fish Promotions.

After two divorces, Sandi Walker, entrepreneur extraordinaire, is on her own and loving it. As a devout animal lover, she has made a success of the only gourmet pet food bakery in Midland, Texas. She’s also a pet foster parent and has fifteen assorted abused and unwanted animals at home. When a golden-colored stray dog with an abundance of personality appears at her door, she can’t refuse him and she can’t keep from falling in love with him. She names him Waffle and gives him a permanent home.

General Manager of the Flying C Ranch, Nick Conway, has searched for months for his lost dog, Buster. Giving up on ever finding him, he looks for a new dog and finds a puppy at a pet grooming shop. While he went to the shop to see a puppy, he also encountered a beautiful redheaded woman he can’t put out of his mind. Little does he know that she found Buster in an alley and has now claimed him as her own. Sparks fly between Sandi and Nick when he steals Buster and sues her in court for custody. It will take a mouthy parrot, a sitting judge, the matchmaking skills of the Domestic Equalizers and Cupid himself to resolve this conflict.


Close to sputtering, all Sandi could manage was, “I love Waffle and he loves me.”

“Look, I apologize for coming across wrong. I got overexcited when I realized I’d found my dog.” His deep voice almost became a purr. Sexy and seductive. “I know that women who are alone tend to get involved with their pets, especially if they don’t have much social life or kids to take care of and—

“What? You know nothing about me. About my life.”

“Now don’t get upset. I asked the woman who gave me this puppy about you. She told me you’re divorced and don’t have any kids, so you give all your love to animals.”

Such a rage raced up Sandi’s spine her head might explode and her eyes might burst from their sockets. She squelched the powerful urge to grab her head with both hands in case that very thing happened. She would kill that Prissy dead, dead, dead the very next time she saw her. “Prissy Porter discussed me and my personal life with you?” Her voice had become as shrill as a harpy’s. “Why, in all my life, I’ve never—”

“Now, calm down.” Nick patted the air with his palm. “I didn’t mean to upset you. What I mean is, you said you were in love with a parrot, too. What that says to me is you throw that “love” word around pretty freely. Maybe you need a boyfriend or something.”

That was the last straw. “What?” She sank to the floor on her knees beside Waffle and wrapped protective arms around his neck. Summoning her dignity, she set her jaw and lifted her nose. “I’d like for you to leave my store, Mr. Conway.”

“I’d hate to call the police, but I will.” She leveled a searing stare at him that said she meant business. But it was hard to be tough when she was sitting on the floor and he stood six feet tall above her. Their stares locked.

“Okay, I’ll leave,” he snapped. “But I’ll be back. Buster is my dog and you can’t refuse to give him to me.” He reached down and stroked Waffle’s head, putting only inches between her face and his. “Don’t worry, Buster,” he said to Waffle. “I’ll be back to rescue you.”

He straightened and stepped back. Waffle sprang forward. Even with all her strength, Sandi barely held him in check. She scrambled to her feet, still hanging onto his collar. “We’ll see about that. Have you ever heard possession is nine-tenths of the law?”

He glared at her. “Oh, yeah? Have you ever heard a picture’s worth a thousand words?”

If you are looking for a romantic comedy that will keep you in stitches, than look no further, You Can Have My Heart, But Don't Touch My Dog by the sister author team of Dixie Cash is the one for you!

Twice divorced Sandi Walker is a devout pet lover and owner of a gourmet pet food bakery in Midland, Texas. Disillusioned with love, she turns her affections to being a foster pet parent to abused and unwanted animals. When a stray dog appears at her alley door, she doesn't hesitate to take him in, name him Waffle, and give him a permanent home.

Nick Conway is the general manager of the Flying C Ranch. He recently lost his dog named Buster, and he has heartbrokenly searched all over for him with no luck. Nick unexpectedly meets Sandi when he goes to a pet grooming shop to get a new puppy. Little does Nick know that Sandy has found his dog, and she has claimed him for her own!

Sparks fly between Nick and Sandi, but a little issue of loving the same dog causes a conflict that only the matchmaking skills of the Domestic Equalizers and Cupid himself can resolve!

In You Can Have My Heart, But Don't Touch My Dog, the sister author team of Dixie Cash weaves a delightfully entertaining romantic comedy that is so much fun to read. You can't help but get drawn into Sandi and Nick's story, it has a wonderful mixture of humor, drama, and romance that will appeal to pet lovers and fans of romantic comedies.

I loved the spark of attraction and the witty banter between Sandi and Nick, and when you add in the mutual love for their pets, and the crazy drama that ensues with the matchmaking help of the domestic equalizers, this fun story has a sweet mixture of romance and laugh-out-loud moments that definitely will put a smile on your face!

I have not read any of the previous books in The Domestic Equalizer Series, but after reading this book, I definitely will go back and check out the other books in the series! 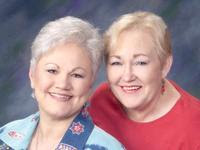 Dixie Cash is Pamela Cumbie and her sister Jeffery McClanahan. They grew up in West Texas during the great oil boom, an era filled with "real-life fictional" characters who cry to be written about. Pam has always had a zany sense of humor and Jeffery has always had a dry wit. Surrounded by cowboys and steeped in country-western music, when they can stop laughing long enough they work together creating hilarity on paper. Both live in Texas--Pam in the Fort Worth-Dallas Metroplex and Jeffery in a small town near Fort Worth. Jeffery also writes steamy contemporary romance novels under the pen name of Anna Jeffrey.

Author Dixie Cash will be awarding a $20 Amazon or B&N Gift Card to a randomly drawn winner via rafflecopter during the event.

You Can Have My Heart ... by Dixie Cash ~ Book Blast Event Page

Posted by Kathleen Higgins-Anderson at 1:04 AM