In association with Partners in Crime Virtual Book Tours, Jersey Girl Book Reviews is pleased to host the virtual book tour event for The Advocate's Daughter by author Anthony Franze! 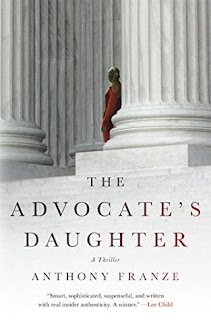 
Disclaimer: I received a copy of the book from the author / publisher via NetGalley in exchange for my honest review and participation in a virtual book tour event hosted by Partners In Crime Virtual Book Tour.

A Washington, D.C. lawyer and a frequent major media commentator on the Supreme Court, Anthony Franze delivers a high-stakes story of family, power, loss and revenge set within the insular world of the highest court of our country.

#1 New York Times bestseller Lee Child called The Advocate’s Daughter “smart, sophisticated, suspenseful, and written with real insider authenticity.” Suspense Magazine hailed it as “the ‘best of the best’ when it comes to suspense.” And Library Journal said it “gives readers an inside peek at the world of the Supreme Court, and tossing in an intriguing mystery only adds to the thrills.”

Among Washington D.C. power players, everyone has secrets they desperately want to keep hidden, including Sean Serrat, a Supreme Court lawyer. Sean transformed his misspent youth into a model adulthood, and now has one of the most respected legal careers in the country. But just as he learns he's on the short list to be nominated to the U.S. Supreme Court, his daughter, Abby, a talented and dedicated law student, goes missing. Abby's lifeless body is soon found in the library of the Supreme Court, and her boyfriend, Malik Montgomery, a law clerk at the high court, is immediately arrested. The ensuing media frenzy leads to allegations that Malik's arrest was racially motivated, sparking a national controversy.

While the Serrat family works through their grief, Sean begins to suspect the authorities arrested the wrong person. Delving into the mysteries of his daughter's last days, Sean stumbles over secrets within his own family as well as the lies of some of the most powerful people in the country. People who will stop at nothing to ensure that Sean never exposes the truth.

In The Advocate's Daughter, author Anthony Franze utilizes his legal knowledge and position as a Washington D.C. attorney with Appellate and Supreme Court experience, to weave a riveting legal thriller that takes the reader behind the scenes into the inner workings of the United States Supreme Court, and the high power political world of Washington D.C., that will keep them guessing and turning the pages.

From its gritty dark beginning to climatic ending, The Advocate's Daughter is an action packed and fast paced gripping tale that follows Washington D.C. attorney and potential Supreme Court nominee Sean Serrat, as he investigates the murder of his daughter Abby, a law school student, who was found dead in the Supreme Court's library. But the investigation gets complicated when a haunting dark secret from Sean's past resurfaces, and the intense media frenzy reveals hidden family and powerful political secrets, and add into the mix people who don't want him to solve the murder of his daughter, can Sean overcome the danger and expose the truth?

As a fan of legal thrillers, especially when they revolve around a political and judicial theme, I was eager to read The Advocate's Daughter, and I wasn't left disappointed! Author Anthony Franze weaves a gripping dark tale that has enough drama, mystery, suspense, intrigue, and surprising twists and turns that easily engages the reader to follow Sean as he investigates the murder of his daughter. I really enjoyed how the author utilized his legal knowledge and experience to transport the reader into the fascinating inner workings of the political and judicial world that is Washington D.C. When you add in the mystery of the murder, the hidden secrets and dark pasts, and the suspense and danger of the investigation, you get an explosive story that takes you on one hell of a thrill ride, and a book that you won't be able to put down! 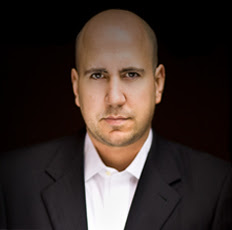 ANTHONY FRANZE has garnered national praise for his work as a lawyer in the Appellate and Supreme Court practice of a major Washington D.C. law firm. The New York Times, Washington Post, and other prominent news outlets have quoted or cited Franze concerning the Supreme Court, and he has been a commentator on high-court issues for The New Republic, Bloomberg, and National Law Journal. He lives in the Washington D.C. area with his family.

This is a rafflecopter giveaway hosted by Partners In Crime Virtual Book Tours for Anthony Franze. There will be 2 US winners of one (1) copy of The Advocate's Daughter by Anthony Franze. The giveaway begins on April 1st and runs through April 30th, 2016.

Posted by Kathleen Higgins-Anderson at 12:17 AM