In God We Trust: The Journey of Jack Sampson's $1 and $100 Bills by Heather Hummel (Book Review) 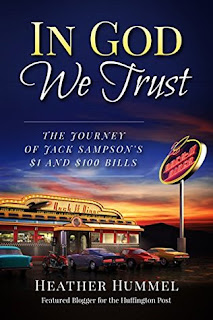 In the summer of 1976, Sylvia—a young, widowed waitress—receives a $100 tip. That same afternoon, her 10 year old son, Jack, is handed a brand new bicentennial $1 bill as change for candy in the town’s General Store. With piqued curiosity about the statement In God We Trust, Jack leaves his mark by writing his name in bold letters on both his $1 bill and his mother’s $100 bill before they go back into the world. He cannot begin to know the people and scenarios the bills will impact as they pass through the hands of others over time and distance.

Years later, Jack’s past catches up with him. Shaken from his pristine position as CEO of a magazine publishing company in his San Francisco, complete with a corner office view of the Bay, Jack comes to understand the true meaning of loss and found.

The story of IN GOD WE TRUST reveals the journey of each bill and the people who either saved them or spent them. The question is: Whose hand would be the last to hold the $1 and $100 bills?

Have you ever wrote your name on a dollar bill for a contest giveaway or raffle? Well then come along for the ride as one little boy's name written on a dollar bill and a one hundred dollar bill journeys around the USA for twenty-five years touching the lives of eight people.

In In God We Trust, author Heather Hummel weaves a wonderful contemporary literary tale that follows the inspirational journey of a dollar bill and a one hundred dollar bill from 1976 to 2001 that bears the name of ten year old Jack Sampson.

In a span of twenty five years, one little boy's questioning of what 'In God We Trust' means on the bills leads him to write his name on the bills as his way of letting everyone know that he trusts in God, and unknowingly connects eight people from all walks of life around the country when the bills come into their possession, and ultimately coming full circle for Jack in 2001.

Set in Pontiac, Illinois with stops around the US, and told in the third person narrative, the author weaves a fascinating tale that easily engages the reader to follow the bills' journey around the country as they touch the lives of eight very different people. Each chapter is broken down into an individual snippet of the eight people's lives, and how they are changed when they receive and pay forward the one dollar or one hundred dollar bill. The author does a wonderful job of describing what receiving and using the bills meant to each of the people, their stories are touching and will stay with you for a long time. As the bills make their journey around the country for twenty-five years, the reader is finally brought up-to-date in 2000-2001 with a now thirty-three year old Jack Sampson, and how the memory of writing his name on both the bills back in 1976 now comes full circle with a new understanding of the meaning of loss and found that will ultimately change his life forever.

In God We Trust is an inspirational and feel good contemporary literary tale that will pull at your heartstrings, touch your soul, and leave a smile on your face. 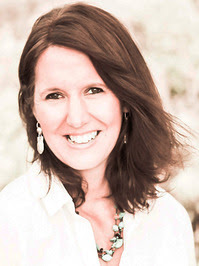 Heather Hummel has penned over a dozen books as a ghostwriter. Her clients include corporations, politicians, philanthropists, and public figures. With experience in both traditional and independent publishing, Heather's diverse background and knowledge of the industry appeals to many authors seeking a qualified ghostwriter.

Heather is a featured blogger in the Arts & Culture section of the Huffington Post. Television, print, and radio coverage for her clients’ books include: The Today Show and other regional shows; Publishers Weekly, USA Today and the Washington Post; and in magazines that include: Health, Body & Soul, First, and Spry Living, a combined circulation of nearly 20 million in print alone. A contributing author in Successful eBook Publishing: The Complete How-to Guide for Creating and Launching Your Amazon Kindle eBook by David Wogahn, Heather shares her wisdom in a chapter on ghostwriting.

Heather's second career is as a land and seascape photographer. Her work is represented by Agora Gallery in the Chelsea District of New York City.

A graduate with High Distinction from the University of Virginia, Heather holds a Bachelor of Interdisciplinary Studies degree with concentrations in English and Secondary Education.

Posted by Kathleen Higgins-Anderson at 3:18 PM