A Hero Grinch for Christmas by Samanthya Wyatt (Book Review) 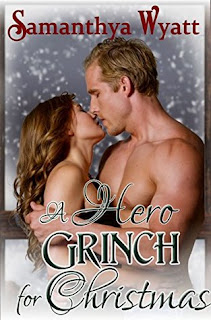 Disclaimer: I received a copy of the book from the author in exchange for my honest review and participation in a virtual book tour event hosted by Reading Addiction Virtual Book Tours.

Dani will not allow The Grinch to hide from Christmas. She will cure Hunter of his nasty mood, even if it kills her. But who will save her from his passionate kisses.

War hero, Hunter Armstrong, has seen enough devastation to last a lifetime. At the end of his latest Army term, he accepted his discharge papers and never looked back. His uncle’s home is tucked away in the majestic mountains, a perfect place for him to hide from Christmas and his own memories. But he can’t hide from the delectable Dani. The last thing he needs is a female in his life. But this one has the face of an angel and eyes you could drown in.

Dani Wimer left the Colorado Mountains and relocated in the bright lights of New York City. Every December she returns to the village of Wyattsville. When a hunky military guy enters her aunt’s shop, he seems lost and angry. His scowl is intimidating, but that doesn’t bother the spunky girl who celebrates the holidays like it’s Christmas every day. She decides to put a smile on his Grinch face and ends up losing her heart in a passionate whirlwind.

Dani stood under the spray of hot water chasing the chill from her bones. She was warm and safe and thinking about her gruff host, remembering the night Hunter came into Fay’s shop. He seemed like a lost soul, but she’d felt a strong pull toward him. Tall, blond, muscular, all the things that attracted a woman. But she’d seen something else in his eyes. A surge she couldn’t explain, and she’d felt herself drowning.

She’d taken a risk by touching him. Covering his hand in compassion. But she was glad she’d initiated the move. He hadn’t pulled away. At least not right away.

She knew his brusque demeanor must be because of his uncle’s death. And today? He didn’t seem too happy to find her on his doorstep. To be fair, she had been in an accident. Just a spin—a very scary spin—off the road. But she’d been in danger from the cold and snow.

He’d taken one good look at her and acted with real concern and caring.

Yes. There was more to the man than his gruff exterior.

Dani snapped out of her daydream and turned the knobs shutting off the water. All she had to do was come up with something to make him smile.

Just like a picture on a Christmas card, the little town of Wyattsville was nestled between two snow-capped mountains. Population 763, a quaint village where his uncle settled after his third marriage failed.

Hunter Armstrong stared out the window while snowflakes grazed the glass, glistening in the nighttime sky. In the distance, every inch of ground was covered with snow. He hadn’t been here in two years, but nothing had changed. The soft glow of lights coming from various windows and storefronts along Main Street reminded him of everything he used to love. Although he should find comfort and joy in the familiar surroundings, instead, he closed his eyes in anguish.

Wheels squeaked and the engine resounded to a soft hum as the train came to a grinding halt. He regarded the passengers around him and waited as they moved to the aisle, gathered their belongings, and one-by-one, headed for the rear door.

They’d reached the end of the line, Wyattsville, Colorado.

With a heavy sigh, he grabbed his gear and loped down the two steps of the train. Blinking lights lined the roof of the depot, with silver, red, and gold decorations, and pine branches tangling around the supporting poles. All that was missing was a group of carolers. Even with Christmas around the corner, he’d expected the town to be vacant. Empty. Judging by the number of people gathered, either a celebrity was on the train, or some sort of festivity loomed.

God, he hated this. Hated waking up every morning to bright and cheerful people, even worse now that the holidays had arrived. A cluster of people were vying for someone’s attention. Whoever stood in the center of the crowd must be important and well loved. The hugs and tears made Hunter’s own circumstances more real. No one was there to meet him.

He shook off his unease, and put one booted foot in front of the other, determined to forget the party. The circle of people opened as he walked by, revealing a man in uniform.

He studied each person, wondering which were relatives—friends—maybe a lover. Hunter’s comrades had not been so lucky.

He hefted the duffel bag higher onto his shoulder and plowed forward, making his way through the crowd. As he stepped off the platform, he spotted several teams of horses hitched to sleighs. He guessed it was a special treat to celebrate the soldier’s return.

With one last glance, he turned the corner and headed toward the center of the village. His hide-away for the next . . . however long, he hadn’t decided yet. There wasn’t any place else he wanted to go. In the mountains he could lose himself; no one knew he was here and he preferred it that way. He sure as hell didn’t want to celebrate Christmas.

Once people discovered his whereabouts, there’d be questions. Especially from the lady he suspected had been his uncle’s sweetheart. Had Denny lived, maybe his fourth wife. He remembered the happy glint in his uncle’s eyes the last time they’d seen each other, which suggested maybe the couple shared more than a friendship. After three failed marriages, the man had sworn off women. But Hunter knew better.

For a moment, a smile tried to form on his face, but misery overrode the effort. He just couldn’t be happy; he’d failed his uncle.

His eyes grew misty. He should have come sooner. Of course, he hadn’t had much of a choice. If the military wanted a GI to have a life outside the Army, they would have issued one. He was a Ranger. Dedicated to his profession.

Well, no more. He’d burned that bridge. All he had was time now. A little late, but he’d made a vow, and he intended to fulfill it.

If you are looking for an emotional holiday romance that will put you in the Christmas spirit, then look no further, A Hero Grinch for Christmas is that book.

Set in Wyattsville, Colorado, decorated Army veteran Hunter Armstrong returns to the house that he inherited from his Uncle Denny. Hunter is definitely not in the Christmas spirit, and all he wants is to be left alone and hide away from the painful memories that haunt him. But that is about to change when Hunter meets sassy Dani Wimer at her Aunt Fay's shop. Dani decides to deliver some Christmas cheer to Hunter, but when her car slides into a ditch, she suddenly finds herself stranded with the hero Grinch. Can Dani ease Hunter's pain and show him that the magical spirit of Christmas is filled with love, hope, and redemption?

A Hero Grinch for Christmas is a wonderful holiday romance tale that easily draws the reader into Hunter and Dani's story. You can't help but feel empathy for Hunter as he battles his demons, even though his nasty demeanor could make a person want to turn around and leave. But Dani isn't one to walk away, her fiesty determination to help Hunter is touching, you can't help but smile as she keeps chiseling away and breaking down the wall around Hunter's heart, all with a smile on her face.

This is a fast paced short holiday tale that has enough emotion, drama, angst, and romance that keeps the reader turning the pages. You can't help but hope that Dani can break through the hard exterior of the war hero, and show him how to once again fill his heart with hope and love. There is nothing better than a holiday romance story that reinforces the belief in the magic and spirit of the Christmas season! 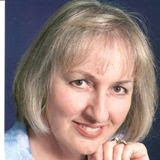 Samanthya Wyatt lives with her husband in the Shenandoah Valley. She left her accounting career and married a military man traveling and making her home in the United States and abroad. Once she found historical romance novels, she couldn’t put a book down. She fell in love with the characters and needed to know their happy ending.

One day she put words to paper creating a story of her own. The more she wrote, the more she became involved with the characters, and they seemed to take a life of their own. She relishes the challenge of penning a story with strong characters, a bit of humor, and active scenes while creating new characters and bringing them together in a romantic tale. It took years of writing, joining RWA, joining chapters, entering contests, submissions & rejections which created the author she is today. By keeping her spirit and turning criticism into drive she has achieved her career as a published romance author.

Click on the above link for the schedule of tour participants

Posted by Kathleen Higgins-Anderson at 12:06 AM