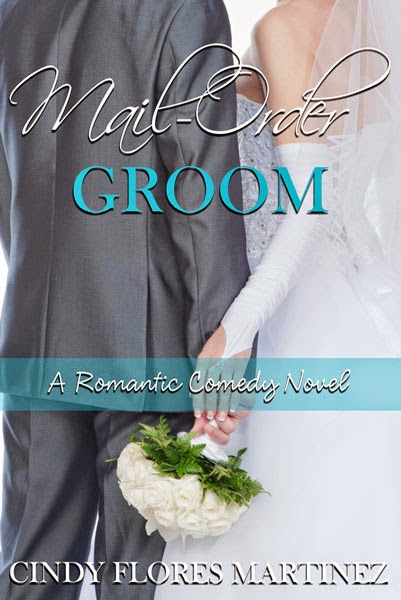 Disclaimer: I received a copy of the book from the author in exchange for my honest review and participation in a virtual book tour event hosted by Book Promotions By Literary Nook.

Mail-Order Groom, a debut romantic comedy novel by Cindy Flores Martinez, was inspired by the author’s own Polish ancestry and is based on her screenplay and movie project of the same title, which she shopped around Hollywood, New York, and other parts of the world.

A sweet romance about an American woman who marries a stranger from Poland after her fiancé leaves her right before the wedding. Lisa is about to marry her first real love and have the wedding of her dreams, but her world is shattered when she finds her fiancé, Jeff, in the arms of another woman. When he calls the wedding off, Lisa is heartbroken.

In a twist of fate, she meets Krzysztof Zielinski from Poland on Mail-Order-Grooms.Com. He needs to marry an American woman so that he can stay in America, and he’s willing to pay money for it. His reason for needing to stay is what tugs at Lisa’s heart and convinces her to say “I do” to him. After all, it’s going to be strictly a business deal. She won’t even have to live with him, and marrying another man would be the perfect revenge on Jeff.

Lisa races to the altar with her stand-in groom, but she soon learns that she actually does have to live with him. Things become even more complicated when she finds herself falling for him, and he’s not planning to stay in America forever. Will Lisa’s heart break all over again or will she find love and happiness in the end?

Dad, whose name was Harold, looked spiffy in a suit and tie.

My heart leapt at the sight of them.

Mom’s face was seized by awe. “Oh, Lisa, you look…” Her radiant stare devoured my dress.

I fumbled with my bouquet. “Thank you.” They hadn’t seen my dress before except in a blurry picture that I had sent them on the day I bought it. I had wanted it to be a surprise to everyone. “You both look good too.” I admired them from head to toe.

Mom’s eyes grew misty. “I mean it, honey. I don’t think I have ever seen you look as beautiful as you do right now.”

Why did they have to pick that moment of all moments to be such wonderful parents?

“So, what’s going on?” asked Mom. “What did you mean when you said you weren’t going to marry Jeff? You were only kidding, right?” The worry lines on her forehead rivaled the worry in her voice.

Dad shot a confused glance toward the empty seats in the sanctuary. “Where are all of his guests?”

Chloe squished her thick eyebrows together. “You’re not going to marry Jeff?”

Zoey spotted Krzys waiting where Jeff was supposed to be. “Who is that man in there?”

I took a deep breath and mustered courage. Even though I had already told Mom and Dad what I was about to say over the phone, saying it face to face seemed so much more difficult. “Mom, Dad,” my heart started beating faster, “it’s like I told you before, I’m not going to marry Jeff today. I’m going to marry a man named Krzysztof Zielinski instead.”

Silence hung in the air.

Mom and Dad let out hearty laughs, and Chloe and Zoey giggled and snorted.

I stood there, agape. When I had imagined telling my parents that I had switched grooms at the last minute, I had pictured a hysterical mother and an arguing father, and maybe even being hauled away to an insane asylum. But total denial? I was caught off-guard by their reactions. I understood, though. I couldn’t believe it was happening myself.

Mail-Order Groom is an entertaining romantic comedy that follows a jilted woman's intriguing journey to the altar with a sweet Polish immigrant seeking a green card after her fiance calls off their wedding.

Lisa has planned the perfect wedding, but days before their special day, she catches her fiance Jeff in the arms of another woman! Unfortunate misunderstandings, accusations, and a heat-of-the moment argument has Jeff dumping a brokenhearted Lisa and calling off their wedding. Determined to have her perfect wedding, Lisa's best friend suggests finding a replacement groom on mail-order-grooms.com. Lisa meets Polish baker, Krzysztof Zielinski, who needs to marry an American woman so he can obtain a green card and stay in the US. Lisa's race to the altar with her stand-in groom is anything but perfect, but can her journey lead her to finding love and happiness?

In her debut novel, author Cindy Flores Martinez weaves an intriguing story that is full of angst, confusion, romance and comedy. Told in the first person narrative, Lisa takes the reader along for the ride on her crazy journey to the altar in search of the elusive perfect wedding that she craves. The reader easily gets drawn into the story from the start with the drastic end of Lisa and Jeff's relationship, to Lisa's frantic search for a replacement groom, to the journey of two people who come together for different reasons and discover that maybe they really do belong together. The story has a good mixture of drama and humor, and enough twists and turns that will keep the reader's interest. Lisa, Jeff, and Krzys' story will take the reader on a crazy roller coaster ride to reach the desired romantic happily ever after ending.

Mail-Order Groom is a touching romantic story that will leave a smile on your face.


My name is Cindy Flores Martinez. I was born and raised in a suburb of Los Angeles. I have an MFA in Creative Writing with an emphasis in Screenwriting. I have been a screenwriting instructor, screenplay consultant, script reader, and screenplay collaborator. My debut novel, Mail-Order Groom, which was inspired by my own Polish ancestry, started out as a screenplay and movie project.

I spent years shopping it around Hollywood, New York, and other parts of the world and had two well-known actors, one of them Academy Award nominated, interested in portraying the lead character’s parents. After not finding the success I wanted, I officially canceled my film production company in November of 2009 and embarked on the journey of turning my screenplay into a novel.

Posted by Kathleen Higgins-Anderson at 1:47 AM