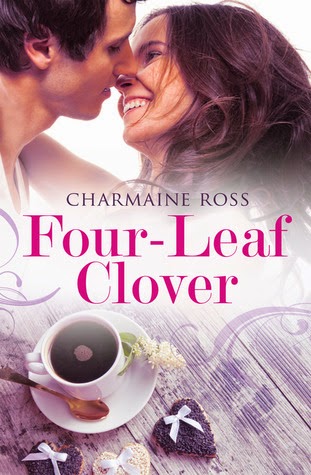 Disclaimer: I received a copy of the book from the author / publisher in exchange for my honest review and participation in a virtual book blast event hosted by Goddess Fish Promotions.

A sexy, sugar-laden David vs Goliath story about a local bakery, a national chain, and what really matters.

Clover Loveday has worked hard to get her café Four-Leaf Clover up and running, her ticket out of an increasingly alarming financial situation and her dream come true. When she literally falls off her ladder into the arms of national bakery chain Upper Crust owner, sexy-as-sin Liam Sinclair, who owns the new bakery being built just across the road, she decides that no matter how nauseated she is about the idea, it is best keep your enemy close, rather than leave things to fate.

Liam has never put too much thought into the competition when he opens a new outlet, other than taking their customers and strengthening the Upper Crust brand. But here in the beautiful Dandenong Ranges, Clover Loveday’s cafe is a little too close for comfort, and Clover Loveday a little too good-looking. So Liam asks his PA to put together a Fact Sheet about his new competition. He has a business to run, a father to please, and hundreds of people to keep in jobs. Surely information can keep an unwanted strong sexual pull at bay…

She could barely recognise the sound that escaped her mouth as hers. It was a sound from the back of her throat. Breathy and gravelly and potently full of wanton desire. But this was what she felt. This was what she wanted. Sensation raced through her body and pooled between her thighs.

She relaxed her legs, unable to retain any strength in them. The slow build of passion now quickly firing to a feverish need that demanded to be eased. A tremor of hunger raced through her as his hand rested on her thigh.

His fingers slipped beneath her hem, rising ever so slowly up her leg. She relaxed her legs, opening them enough for him, inviting him to touch her, appease her. Her body trembled, never having felt so alive as it did now.

His hand brushed her intimacy. She cried out, jerking at his first wonderful touch. The pad of his thumb traced the curve of her body and soon she was panting, skin heated with perspiration, heady with a blinding need, her underwear now a too-thick barrier.

His mouth left her breast. She cracked open hazy eyes to see him above her, watching her with savage hunger in his eyes. ‘I want you.’ His voice was rough and low and set her insides tumbling.

She sat, fingers working at his shirt. Her fingers trembled too much to undo the last buttons, so she slipped them inside the material, his heated skin scorching hers. Her fingers found his shoulders, caressing, probing, laving attention to the dips and undulations of skin above rock solid muscle.

He lifted his shirt over his head, throwing it to the floor and her fingers went immediately back to their ministrations. She saw his jaw clenching and unclenching and she wondered at the control it took for him to sit there and let her explore.

Her fingers slipped beneath the waist of his pants, his erection clearly evident, pushing against the material. His eyes closed and he tipped his head back as she slid her fingers over his groin, rubbing the tip of his penis through the material. She undid his belt, then the top button at the waist. His hand clenched around her wrist, and she looked up at him, their gazes locked.

There was a sheen of perspiration on his face, his features strained and serious, but she was drawn to the fierce burning in their depths. ‘I won’t go on until I know you want me too.’

Four-Leaf Clover is a delightful romantic story about opposites attracting and overcoming obstacles that stand in the way of their finding true love. Set in the small Australian town of Kallista, the reader follows the unexpected love story of Clover Loveday and Liam Sinclair.

Clover Loveday is an independent and self-reliant woman whose dream of owning a bakery/cafe is coming true with the opening of Four-Leaf Clover Cafe. But just as her dream is about to come true, a national chain bakery called the Upper Crust is opening up across the street from her cafe. She is determined that nothing is going to get in the way of her cafe's success. But with family debts mounting, a sick mom who needs her, and the responsibility of owing the cafe, Clover doesn't have the time to be just a carefree young woman, especially when she has the weight of the world on her shoulders.

Liam Sinclair's family corporation, Sinclair & Sons build and operate Upper Crust, the nationally successful chain of bakeries. He has always been proud of his contributions to growing the family business, that is until he meets the sassy Clover Loveday, who not only challenges him but gets him to rethink his family's business practices, as well as what is missing in his life!

Four-Leaf Clover is an enjoyable romance story woven in the classic style of David versus Goliath ... when small business goes up against big business ... only to evolve into an unexpected opposites attracting with an opening of hearts that allows true love to change everything!

Author Charmaine Ross does a wonderful job of easily drawing the reader into Clover and Liam's love story. From the opening paragraph forward, the author slowly builds upon the opposite attracts theme. As Clover and Liam try to ignore the mutual attraction that is growing between them, it sure is fun to watch as their relationship develops. The author does a great job of building upon their physical attraction as sparks fly and intimacy grows, as well as developing their relationship into one where they work together to overcome their emotional past baggage, family drama, business obstacles, and misunderstandings to find love. I really enjoyed how their differences provided a balance in their lives, it was fun to watch as they discovered one another, changed and grew along the way.

Four-Leaf Clover is a sweet, sassy, and heart-warming romance story that is perfect to read as you while away a lazy summer day, it will leave a satisfied smile on your face.

I live in Upwey, a very leafy suburb of outer Melbourne. I can hear most Melbournians say, ‘Where?’ Think Puffing Billy, the hills and inexcusably steep driveways and you're there. We have a house with room for the kids to play in the backyard, the cat to sleep wherever and the husband to lounge on a bean-bag in front of the telly. I love romance because it adds so much to the story. Everyone needs a little love to take them away. 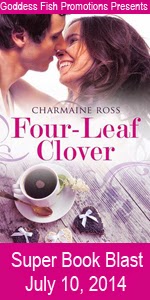 Author Charmaine Ross will be awarding a copy of the book to a randomly drawn commenter during the tour.

Posted by Kathleen Higgins-Anderson at 1:51 AM