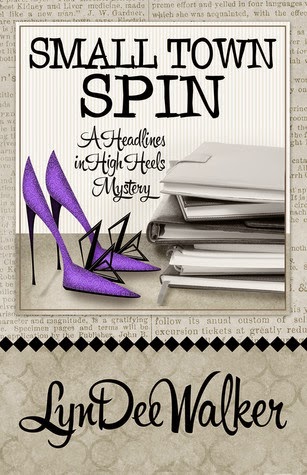 Disclaimer: I received a copy of the book from the author / publisher via NetGalley in exchange for my honest review and participation in a virtual book tour event hosted by Great Escapes Virtual Book Tours.

When a superstar athlete’s son turns up dead in a tiny town on the Virginia coast, crime reporter Nichelle Clarke gets the inside scoop. But she quickly spies a gaping hole her inner Lois Lane cannot ignore.

Determined to unravel the mystery, Nichelle fights off paparazzi cameras and an unexpected rival. She uncovers an illegal moonshine operation, a string of copycat suicides, and a slew of closets stacked with more skeletons than slingbacks. Chasing a killer who’s a breath from getting away with murder, Nichelle realizes too late the culprit has her number—and it might be up.

Generally, the number of blocks on a calendar that I don’t work are rarer than comfortable shoes at a runway show. But four hours into a double shot of Claritin and DayQuil on a sunny April afternoon, I still felt like I’d been hit by a truck, and had only managed to finish one story.

“I think pollen season has won the afternoon, kiddo,” my editor said, eyeballing me from the doorway of my cubicle. I tried to lift my head to reply, but dropped it back to my desk with a dull thunk.

Settled on my overstuffed navy sofa with my toy Pomeranian snuggled in my lap and the TV remote in hand, I managed three sips of my honey-lemon tea before my Blackberry erupted into Second Star to the Right.

The dog sat up and growled. I patted her and dropped the remote, reaching for the phone. Parker.

“I really am sick,” I said by way of hello when I picked up. Just in case he couldn’t tell—a shoebox full of clothespins clamped on my nose wouldn’t have lent my voice any more of a ridiculous twang.

“You’ll thank me in a minute,” he said. “I have a story for you. An exclusive, if you can drag yourself back out of bed.”

“Drugs or gambling?” I asked, tilting my head to hold the phone against my shoulder while I reached for a notebook and pen. Parker was the star sports columnist at the Richmond Telegraph, and I figured if he was tipping the crime reporter (that’d be me) to a story, it meant an athlete had been busted for one of those things.

“Aw, hell.” I blew out a short breath and dissolved into a coughing fit. “Sorry. Stupid pollen. I hate writing about suicides. Of all the depressing stories I do, those are the ones that get to me the most.”

“I need you to do this,” he said. “Personal favor. It—” His voice broke, and he paused. “It won’t stay quiet forever.”

His pleading note left no room for excuses—or allergies. Parker was a good friend. I could suck it up to help him out. Plus, sad subject aside, I couldn’t hang up without getting the scoop. Story of my life.

“The football player?” Holy Manolos. “How do you figure that’s going to stay quiet for three seconds? That guy is a living legend.”

“Tony Okerson, Junior,” Parker said, and I pinched my eyes shut. A kid. Crap, crap, crap. I noted the name and listened as he went on.

“So far, they’ve kept a lid on it, but it’s only been a few hours,” he continued. “The local paper will run a spread tomorrow and it’ll be open season. Tony is one of my best friends, Clarke. They’re devastated.”

“I can’t imagine,” I said, my heart dropping into my stomach at the depth of pain in his voice. “I’m sorry, Parker. But what is it you want me to do with this?”

“Tony’s convinced he can control the media spin. I told him he has a better shot if he talks to you and lets us break the story. You know cops and crime better than anyone. Can you be in Tidewater by four o’clock?”

“When Tony retired last year, they moved into their beach house. It’s on a little island out there. Tony wanted his kids to have normal childhoods. Thought moving to a real-life Mayberry was the best way to keep them grounded and safe.” Anger bubbled just under the sorrow in Parker’s voice. “He said he’d talk to you tonight. I told him he could trust you. But this whole thing is making me antsy. I’m just waiting for someone to tweet him a well-meaning ‘My condolences.’ It’ll be all over the Internet in an hour as soon as that happens.”

“Yeah. I just…I’m not asking you to print anything that’s not true, but I figure if you soften it, maybe the TV folks won’t smell blood in the water, you know?”

I shook my head, staying quiet. The suicide of a three-time Super Bowl champion quarterback’s son wouldn’t go unnoticed for long. The size of the town where it happened was likely the only reason it wasn’t already all over ESPN. And the sleepy little burg was in for a rude awakening when the cameras descended.

“What happened?” I asked finally.

“I don’t know,” he said. “They found him out by the shore early this morning.”

I knew the tone. Too well. But I didn’t want to think about that, so I shoved the memory to the back of my mind and locked it away. Parker. His friend. Big story, handle with care. Focus, Nichelle.

“Not that I know of.” The words choked off and I heard a couple of deep breaths before he cleared his throat. “I’m not really clear on the details. But they’ll fill you in. Take care of this for me, huh, Clarke? I taught that kid to throw a baseball. Bounced him on my knee. Cheered at his games. He was a good boy. Smart. Talented. If we can keep it from turning into a media circus, let’s do it.”

“I’m on it,” I said, ignoring Darcy’s yip of protest when I moved her into the floor and sat up. “I’ll be there as soon as I can. Text me the address?”

“I’ll send it right after I hang up. And thanks.”

“I really am sorry.” The words felt lame, but I knew from too much experience they were the only ones that fit.

Small Town Spin is the third book in A Headlines in High Heels Mystery series. This entertaining cozy mystery is set in Richmond, Virginia that follows the latest investigative adventure of crime reporter and shoe maven Nichelle Clarke. Nichelle is a crime reporter for the Richmond Telegraph, who is asked to investigate the apparent suicide death of an up and coming high school star athlete in the small town of Matthews. The investigation heats up when the teen's girlfriend is also found dead, leaving Nichelle trying to figure out why the teens are dying in Matthews. Added into the mix is the discovery of an illegal moonshine operation, copycat suicides, and if that isn't enough, Nichelle is still involved in a love triangle with her friend Joey, a Mafia mob boss and her former lover Kyle, who is a Special Agent in the local ATF office. Oh and did I mention that Nichelle's still has issues with her co-worker nemesis? Nichelle has her hands full and is up to her high heels in trying to solve her latest investigation!

Author LynDee Walker weaves a fun action packed tale that is full of humor, drama, romance and suspense. I have become a fan of cozy murder mysteries set in the South, and Small Town Spin kept me pleasantly entertained. I loved the mixture of humor and suspense in this story, I was easily drawn into Nichelle's latest investigative adventure, there was enough twists and turns that kept me guessing what would happen next. I enjoyed that the mystery was the main theme and that the love triangle / romance aspect is secondary and did not distract the reader from the overall whodunit theme of the story.

If you are looking for a delightfully intriguing cozy mystery whodunit with fun characters and a dash of romance in the mix, then Small Town Spin is the book for you! 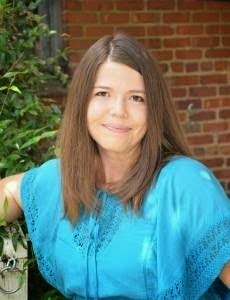 LynDee Walker’s award-winning journalistic work has appeared in newspapers and magazines across the nation. After nearly a decade covering crime, courts, and local politics, she left full-time reporting for motherhood with a side of freelancing and fiction writing. Small Town Spin is the third in her bestselling Headlines in High Heels Mystery series. The fourth arrives January 2015.

LynDee adores her family, her readers, and enchiladas. She often works out tricky plot points while walking off the enchiladas. She lives in Richmond, Virginia, where she is either playing with her children or working on her next novel (but probably not cleaning her house).

Posted by Kathleen Higgins-Anderson at 4:09 AM