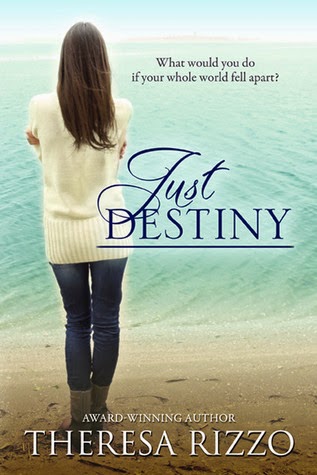 What would you do if your whole world fell apart?

Jenny Harrison made some poor choices in the past, but marrying Gabe was the best thing she’d ever done. They had the perfect marriage, until a tragic accident leaves Gabe brain dead and her world in ruins.

Devastated by grief, she decides to preserve the best of their love by conceiving his child, but Gabe’s family is adamantly opposed, even willing to chance exposing long-held family secrets to stop her. Caught in a web of twisted motives and contentious legal issues, Jenny turns to best friend and attorney, Steve Grant. Steve wants to help Jenny, but he has reservations and secrets of his own.

When something so private and simple turns public and complicated, will Jenny relent? What is Steve willing to sacrifice to help Jenny?

Steve Grant’s heart pounded as if it might hammer its way right out of his chest. He took a measured breath, stretched an arm across the back of Annie’s chair and settled into his stadium seat. What’s the problem, man? You’ve faced down Billy Ray Butler and Crush Davis, stared them down across home plate, in front of a sold-out crowd without breaking a sweat; you can do this. It’s the right thing to do.

The band’s drums, trumpets and trombones belted out the Michigan fight song. “Let’s! Go! Blue!” The Ann Arbor crowd cheered as one.

“Why’d you give up your fifty-yard-line seats for these nosebleeds?” Annie raised her eyebrows.

“Lemme go,” the three-year-old behind her shrieked as he strained and bucked in his mother’s arms.

Annie winced, covered her ear and gave Steve a knowing look. When they went out without her children, he knew she wanted a break from all kids. These seats cost a small fortune; who in the hell brings their kid along? Steve scanned the packed seats around them—not a damn kid in sight. What were the chances they’d be sitting right in front of the only holy terror?

“One of our paralegals, Pete McGaffy, has his dad in town this weekend to celebrate his first year cancer free. Pete helped me a couple of times so when I found out his dad’s a huge Michigan fan, I gave them my tickets and got these instead.” He glared at the kid beating an annoying tattoo on the back of Annie’s chair, tempted to grab the little ankle to still him. “We have a great view of the whole field from here. Besides, I thought you’d enjoy sitting with Notre Dame fans instead of the enemy for a change.”

Annie had gone to Notre Dame and was a die-hard Irish fan, where as a Michigan alum, Steve’s season tickets bordered the Michigan sideline. She held out her hand for the binoculars and jerked forward as the kid pounded her chair with both of his feet. Stiff backed, Annie scooted forward in her chair.

“Switch seats with me.” Steve stood and pulled Annie out of her seat. She should be safe in front of the dad.

Annie stood and threw the little brat that warning look mothers seem to perfect, before slowly lowering herself into the other seat. Not exactly the mood he wanted to set.

He hoped it wasn’t an omen. Chill, man. She’s gonna love it.

He looked at the giant scoreboard—five minutes to halftime. Steve settled back in the seat, rubbed tight neck muscles, and rolled his shoulders.

He’d chosen these seats carefully. The first row in club level seating had lots of leg room, a bird’s eye view of the whole field, and the cameramen should have no trouble zooming in on them. It was perfe—the boy put a sticky hand on Steve’s head and lunged over his shoulder, nearly falling into his lap. Steve caught him and shoved him back at his parents.

“Henry. I’m sooo sorry. Really. Sorry. I . . . ” His mortified mother tried to lift him onto her lap, but the little boy arched his back and bellowed.

“That’s enough!” the father said. He handed his wife his beer and reached for the boy at the same time the kid jumped up, knocking her arm.

The halftime buzzer sounded loudly as Steve lunged forward, but he couldn’t right the cup before a wave of beer cascaded over the lip, splashing all over Annie’s shoulder, arm, and chest.

Steve stepped back and stared in horror. The pink of Annie’s shirt grew increasingly dark as it soaked up the beer.

“I’m so sorry.” The woman rummaged in her bag, yanked out some baby wipes and held them out to Annie. “I . . . please. We’ll pay for dry-cleaning.”

Annie snatched the wipes, made a few futile dabs at her arm before throwing them on her seat and pushing past Steve.

Annie frowned as if he was crazy. “To the bathroom.”

Eyes widening, she plucked the wet shirt from her chest. “I’m covered in beer.”

Shit. Shit. Shit. “Uh . . . there’ll be a long line. Just wait a little bit.” He turned her toward the field. “Watch the show.” He glanced at the forty-seven by eighty-five-foot screen to see the camera zooming in on them. He pointed toward the field. “Look, they’re spelling out something.”

Steve tightened his grip on her shoulders. “Listen. It’s that Bruno Mars song you love.”

“What is wrong with you?” She glared. “I’m soaked and smell like a frat party.”

Steve pivoted her toward the field and locked his arms around her. “Look.”

Annie looked toward the huge board where the camera had zoomed in on them and they stood larger than life. Her glare melted as awareness set in. She brushed her hair back and a tentative smile flickered across her face.

Steve released her. He wiped damp palms on his thighs, then dropped to one knee and took her hand. “Will you marry me, Annie?”

Hand covering her mouth, Annie dragged her gaze from the huge screen long enough to nod at him. Her glance darted back and forth from the screen to him. She thrust out her left hand. He took the ring box from his pocket, then slid the ring onto her finger.

Annie yanked her hand back and after a quick inspection of the 3-carat marquise, held it up for everybody to see as if she were a winner lofting her trophy. Steve pulled her into his arms for a hug while the crowd cheered and clapped.

Smile, Steve. Even if he couldn’t give her his heart, he’d embarrassed himself in front of millions of people and given her her dream proposal. The love would come.


Are you ready to read an emotionally charged story that will simply leave you breathless? Well then, Just Destiny is the book for you.

For two years, twenty-eight year old Detroit newspaper journalist Jenny Harrison had a wonderful marriage to Gabe, a forty-three year old general surgeon with two college-aged children. Adding to her happiness is the excitement of learning that she is newly pregnant, even though they had originally made the decision not to have children. While on an anniversary weekend getaway, a tragic accident takes the life of Gabe, and a sudden miscarriage turns her world completely upside down. Jenny's life falls apart with the sudden death of Gabe and their unborn baby. Jenny agrees to donate Gabe's organs, and creates an ethical controversy when she requests that Gabe's sperm be recovered and stored at a sperm bank so that she can still have a baby as a loving legacy to her husband. But someone stands in her way ... Gabe's elderly uncle George threatens to sue Jenny if she willfully pursues the artificial sperm insemination.

Steve Grant, an ex-professional baseball player turned attorney, is Jenny and Gabe's next door neighbor and best friend. Steve is a loyal friend who lends his total support to Jenny after Gabe's death. He does not agree with the decision that Jenny has made, but he stands by her during the emotional and controversial legal battle, because deep down he has stronger feelings for Jenny than just friendship, even though he is engaged to another woman. When Steve reveals his true feelings to Jenny, will their friendship turn into something more because it is just destiny?

Oh My Goodness! Author Theresa Rizzo sure does know how to weave an emotionally powerful story that pulls at the heartstrings and stirs the soul! Written in the third person narrative and set in Detroit, Michigan, the readers are easily drawn into Jenny and Steve's story. This is a beautifully written storyline that captivates the reader's attention, it is full of angst, suspense, and enough twists and turns that keeps them guessing. I loved following Jenny and Steve as their relationship gradually changed and developed. You can feel the palpable connection and the angst and guilt that they have because of Gabe's death, it leaves the reader hoping that somehow they'll both find their way to each other.

With a strong cast of characters who are realistic and easy to relate to; dramatic dialogue and interactions; and a stunning storyline that mixes romance, heartache, dark secrets from the past, and titillating courtroom drama; Just Destiny is one hell of a compelling story that will leave the reader emotionally spent. 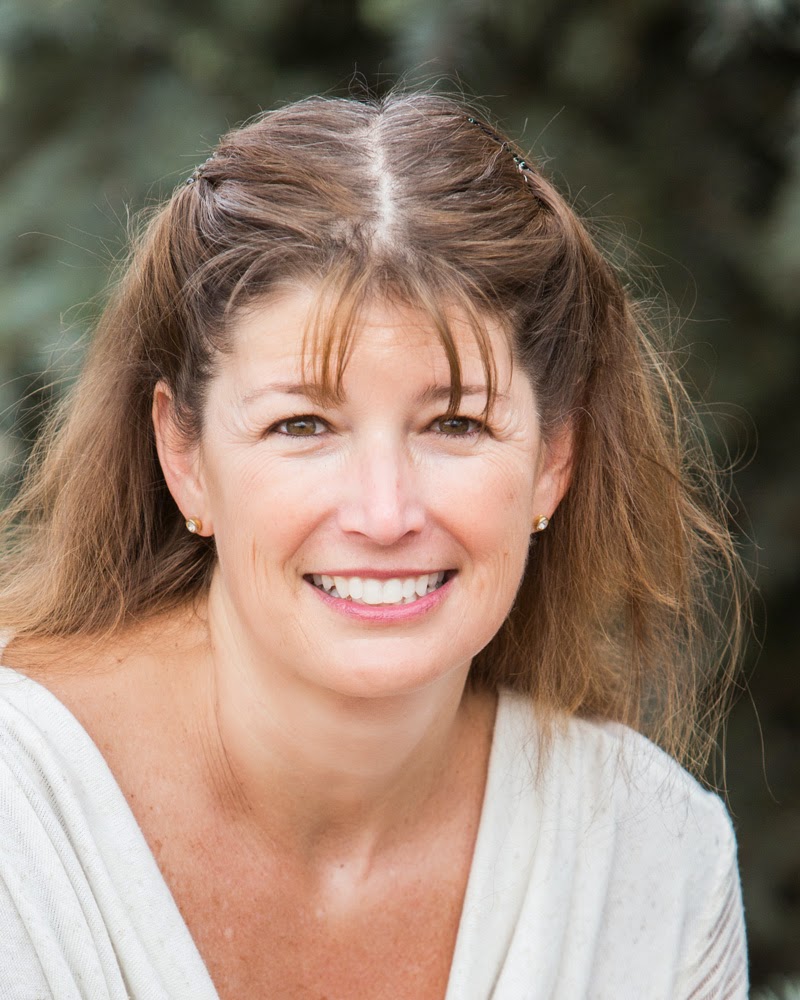 Theresa Rizzo is an award-winning author who writes emotional stories that explore the complexity of relationships and families through real-life trials. Born and raised in Grosse Pointe, Michigan, she now lives outside of Boulder, Colorado with her husband of thirty years.

Posted by Kathleen Higgins-Anderson at 8:59 PM