In association with Mark My Words Book Publicity and author Cheryl Douglas, Jersey Girl Book Reviews is pleased to host the virtual book release day event for Starting Over!

Today is the release day of

Starting Over by Cheryl Douglas!!

Eve Bolton retreats to her childhood home to regain the identity she lost during her troubled marriage. When her husband asks her to come home, she decides it's time for her to start over... alone.

Alex has been so preoccupied running his family's business that he's lost sight of what's important... Eve. But can he make it up to her or is it too late to save their marriage?

Cheryl Douglas began her professional career as a nutritionist, but her love of books started at an early age. She studied writing for many years before she decided to pursue her passion as a full-time career. After receiving constructive criticism from several well-known authors, Cheryl finally had the confidence to write her first romance novel.

The first book in the Nashville Nights series, Shameless, was a book that had been dwelling in Cheryl’s subconscious for years. For her, the surprise came when the manuscript began taking on a life of it’s own. Characters came to life, secondary characters became more prominent, outlines were forgotten, and a single title evolved into an eight book series, and another eight book spin-off series entitled Nashville Nights, Next Generation.

One word would aptly describe Cheryl: workaholic. She lives and breathes her writing, when she’s sleeping, watching TV, driving, reading… it’s always in the periphery of her mind. Her imagination rarely takes a holiday, even when she escapes to a sandy beach with her husband and son, she’s planning, plotting, outlining, and daydreaming.

Cheryl feels blessed to be able to get up every day and do something she loves. The thousands of fans who have embraced the Nashville Nights series have made that possible. She writes for the readers who ask for more, she writes to satisfy the muse residing inside of her, but most of all, she writes because she couldn’t imagine doing anything else with her life. It took her thirty-seven years to decide what she wanted to be when she grew up, but now that she knows, she’s convinced she’s found her purpose.

Win 1 of 5 eBook Copies of Starting Over 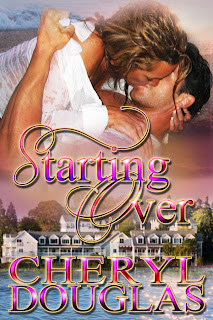 a Rafflecopter giveaway
Posted by Kathleen Higgins-Anderson at 12:26 AM