Running From The Jumbie
By: Pamela Fagan Hutchins


I spent my summer vacation on the run from a jumbie, I swear. Y’all know what a jumbie is, right? A voodoo spirit? Yeah. Well, my island-born husband has one on his tail and it’s none too happy.

The craziness started while I was in the middle of my 60-cities-in-60-days nationwide book tour via a 24-foot RV dubbed the Bookmobile. I guess that bears a little explanation, too. I hit the road to promote the Katie & Annalise series, since the first book in the series, Saving Grace, had done so well, and because Leaving Annalise, the next in the series, was scheduled for a late summer release. I toted my one-eyed Boston terrier Petey the whole way, and I was joined by a revolving lineup of four of my driving-age offspring, my mother, and my husband as drivers/assistants. In other words, they were there to make sure I didn’t go all crazypants under the strain.

My husband had drawn the short stick around the time of #24 in Baltimore and #25 in Cincinnati. We made it from Baltimore to our RV camp ground in southwestern Pennsylvania with nary a wrong turn. We and awoke the next morning to heavy rain. Well, that, and a trailer full of young’uns clustered around a tattooed chain-smoking woman whose breasts had long since succumbed to gravity. There were so many kids of various ages that it was almost like she was the old woman in the shoe, if that old woman had lived in a sagging trailer cum meth lab. We did not tarry.

Fifteen minutes later we were motoring along at 70 mph in West Virginia, holding hands, listening to the audiobook Defending Jacob, and generally being in love with each other and the gorgeous trees and hills when Eric dropped my hand and yelled, “Oh sh*t!”

This really isn’t all that unusual so I barely flinched.

As he slammed on the brakes and pulled to the shoulder, I asked in my soothing voice, “What’s wrong, honey?”

“Stuff is flying out of our cargo hold and onto the interstate!”

Eric didn’t bother answering my question, which, in hindsight, was not all that helpful, anyway. He was out the door and running back the way we had come.

“Be careful!” I shouted, in a loving waste of breath.

I flipped on the hazards and oh-so-gingerly backed the RV a quarter mile up the shoulder. Eric returned with an unscathed sandwich board.

“No one even ran over it,” he said, grinning.

“And nothing else fell out.”

I would have given him a rash about forgetting to latch and lock the cargo hold except that I had done the exact same thing the first week of the tour. So instead I exulted over our good luck and otherwise zipped my lips.

We made it to Cincinnati unscathed, then, after a book signing at Barnes and Noble, we cruised onward to Kentucky, where we parked in a monsoon. Eric stepped out of the Bookmobile into two inches of water. Unfortunately, we were in dire need of dumping our tanks, so dump he did. He came back in bleeding.

Dumping doesn’t usually involve sharp objects, so the source of his wound remained a mystery. He washed and bandaged himself, and then we slept sweetly and deeply in the endless rain, waking refreshed, if soggy. We raced through the rain to the laundry room. We sampled the facilities, to discover THE BEST shower rooms in 26 cities! Thank you Whispering Hills RV Park in Georgetown, Kentucky. We dashed back with our dry laundry and got ready to go.

“Have you seen the keys?” Eric asked.

“Not since you used them to open the dump hatch last night.”

Water dripped from the end of his nose and the set of keys dangling from his right hand. He grinned.

“Where’d you find them?”

I tightened my jaw to control my smile. “Honey, I swear, you have a jumbie. A jumbie who unlatches the cargo hold. Who slices open your hand as it rips away your keys and tosses them to the ground. He’s probably the one who keeps hiding your glasses and Blackberry, too.”

He nodded, his face blank but his eyes twinkling. “He’s jealous of all the attention I get in your books.”

“Annaly never had a jumbie,” I said, referring to the possibly-haunted house we used to own on St. Croix in the U.S. Virgin Islands. “The jumbie was after you all along.”

“I’d better sprinkle some chicken blood around the Bookmobile or he’ll keep following us on to Tennessee.”

“Or I could just dedicate my next book to him instead of you. Maybe a little acknowledgement, a little validation, is all he needs.”

So on we trekked through beautiful (wet) horse farms and flint hills to Lexington for an amazing event at Barnes and Noble, then to that night’s RV Park. We arrived in Horse Cave, Kentucky and collapsed in a happy heap until all of three a.m., when Eric’s jumbie, not to be ignored, whipped a nearby rooster, two chickens, a donkey and a turkey into a frenzy.

I think I’d better hurry and get out my next book with its jumbie dedication. 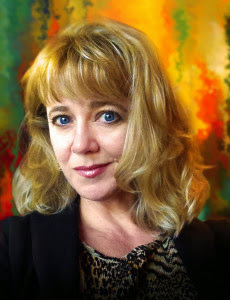 Pamela Fagan Hutchins is an employment attorney and workplace investigator by day who writes award-winning and bestselling mysterious women’s fiction and relationship humor by night. She is passionate about great writing and smart author-preneurship. She also leaps medium-tall buildings in a single bound, if she gets a good running start. 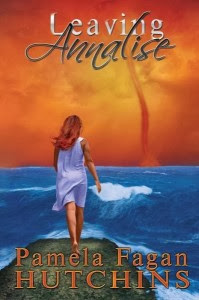 Disclaimer: I received a copy of the book from the author / publisher in exchange for my honest review and participation in a virtual book tour event hosted by Pump Up Your Book! Virtual Book Publicity Tours.

Volume 2 in the Katie & Annalise Series: One unexpected and hotly fought-over little boy, two dead bodies, and a series of home vandalisms throw Texas attorney turned island chanteuse Katie Connell into a tizzy. Juggling all of this, Bloody Mary cravings, baggage, and the bad guys too, she waffles between the jumbie house that brought her back from the brink and the man she believes is the love of her life.

In Leaving Annalise, the second book of the Katie & Annalise series, author Pamela Fagan Hutchins transports the readers back into the world of sassy Katie Connell as her madcap adventures continues on the island of San Marcos.

Just like Saving Grace, the first book in the series, Leaving Annalise is a fast-paced entertaining romantic mystery that has just the right amount of drama, suspense and romance that keeps the readers intrigued and turning the pages. Author Pamela Fagan Hutchins weaves an exciting and humorous tale told in the first person narrative by sassy Katie Connell. Katie takes the reader along for the ride on her latest adventure with jumbie Annalise on the island of St. Marcos. This story centers around the relationship between Katie and Nick, but another murder mystery and ensuing mayhem shakes things up on this picturesque island. It has clever subplots, drama, action and suspense, and zany characters that entices the reader to follow along as Katie continues to renovate the jumbie house with a series of mysterious mishaps, navigates her roller coaster love life with Nick and a crazy stalker named Brad in pursuit, and tries to stay one step ahead of trouble that always seems to follow her. And if that isn't enough for you, it has some heartfelt and emotional romance and friendship thrown in the mix.

Leaving Annalise is part of a thoroughly entertaining romantic mystery series. Author Pamela Fagan Hutchins has a way of keeping the readers captivated with Katie's latest adventures, and oh by the way, there is more adventures in the works when Finding Harmony, book three in the series is published in February 2014!

Posted by Kathleen Higgins-Anderson at 4:34 PM