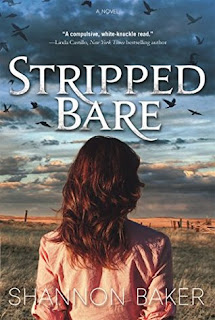 
Disclaimer: I received a copy of the book from the author / publisher via NetGalley in exchange for my honest review and participation in a virtual book review promotion by Roger Charlie Publicity.

Stripped Bare by Shannon Baker is "A must read" (Alex Kava, New York Times bestselling author) that stars a female Longmire in the atmospheric Nebraska Sandhills.

Kate Fox is living the dream. She’s married to Grand County Sheriff Ted Conner, the heir to her beloved Nebraska Sandhills cattle ranch, where they live with Kate’s orphaned teenage niece, Carly. With the support of the well-connected Fox Clan, which includes Kate’s eight boisterous and interfering siblings, Ted’s reelection as Grand County Sheriff is virtually assured. That leaves Kate to the solitude and satisfaction of Frog Creek, her own slice of heaven.

One night Kate answers a shattering phone call from Roxy at the Bar J. Carly’s granddad Eldon, owner of the ranch, is dead and Ted has been shot and may never walk again. Kate vows to find the killer. She soon discovers Ted responded so quickly to the scene because he was already at the Bar J . . . in Roxy’s bed. And to add to her woes, Carly has gone missing.

Kate finds out that Eldon was considering selling his ranch to an obscenely rich environmentalist. Some in town hate the idea of an outsider buying up land, others are desperate to sell . . . and some might kill to get their way. As she becomes the victim of several “accidents,” Kate knows she must find the killer before it’s too late. . . .

I've never trusted happiness. Just when you think you've corralled that mustang, she busts through the fence and leaves you with splinters. I should have seen it coming.
Still, when I tromped across the back porch, feeling grateful to be out of the frosty night air, I wasn't worrying about my world turning into a sloppy, wet pile of manure. My calving ratio sat at a hundred percent so far this year. Maybe I could convince Ted to take a week off after the election and head down to a beach someplace, anyplace away from cattle and family and sheriffing.
The house lights weren't on when I'd trudged from the barn. Carly was supposed to be home working on the term paper she'd blown off last semester. Using her charm, Carly had convinced the English teacher to give her another chance. If she didn't finish the paper this time, though, she wouldn't graduate, and my dear niece would be living with me forever.
I pried off one cowboy boot and dropped it to the porch floor, wondering how to motivate Carly without pushing too hard. The jangle of the phone penetrated the door to the house. I could have ignored it, but if Ted didn't answer his cell, the county sheriff's number rolled over to the landline installed in our house. I burst through the door and thudded across the kitchen. With one boot on, one boot off, I flew into the closet-turned-office and grabbed the old-fashioned receiver. "Sheriff's phone."
"Listen, Kate, Uncle Bud and Aunt Twyla are planning Easter at their place and I told them you'd bring that seven-layer salad."
As far as the Fox family was concerned, you can run but you can't hide. "Hi, Louise." My older sister. One of them, anyway. "We've talked about you using the sheriff's phone only for emergencies. Right?"
The reminder was as effective as ever. "You won't answer your cell. Let me talk to Carly."
"Carly's not here." Where was she, anyway? And where was Ted?
I stretched the phone cord. Grand County didn't believe in fancy equipment like cordless phones. They sprang for Ted's cell phone, but he wasn't supposed to use it for personal calls. I slapped on the light, squinting into the tiny living room. Several books were scattered on the floor. A potted plant spilled dirt onto the worn carpet and the throw from the threadbare couch puddled in the middle of the living room. The chaos seemed unusual, even for Hurricane Carly.
"Where is she?" Louise asked.
"Not sure." Maybe I wasn't fit to be a guardian, but I thought a girl destined to graduate from high school in a month ought to have a fair bit of autonomy. Course, with Carly's history, I was balancing on barbed wire there.
Louise paused to build up steam. "You should supervise her better. She needs —"
A syllable blanked from her lecture. "Gotta cut you off," I said. "The sheriff's second line."
I punched line two, expecting another one of my siblings, who'd also been warned against using the official sheriff's line. "Sheriff's office."
"Oh God, oh God, oh God!" Sobbing, hysterical. A woman blubbered into the phone. "Oh God!"
It took a moment to recognize the voice. It wasn't one of my favorites. "Roxy?"
More sobbing. "He's dead. He's dead. I think. Oh God."
"It's Kate. Who's dead? Where are you?"
"Kate. Oh my God. Blood!"
My skin chilled and my scalp prickled, despite knowing Roxy's penchant for drama. As Ted's old high-school girlfriend, and by some unfortunate quirk of fate, Carly's stepmother, she'd been plaguing me for years. "Roxy!" I yelled, trying to shock her hysterics away.
It didn't work. "I don't know who to call. I came home and the door was open. There's blood everywhere."
"Whose blood? Where are you?"
She finally sounded as if someone caught her with a grappling hook and dragged her slowly down to the ground. "I'm at Eldon's."
Eldon Edwards was her father-in-law. Their houses were only one hundred yards apart and a good half hour from the nearest town. "Is he hurt?"
She started to sob again. "He's dead. He's been shot."
Dead? Eldon? No. My brain tried to push the words away. This was definitely a job for the sheriff. "Okay, hang on. I don't know where Ted is, but I'll find him and get him out there right away."
"He's shot." Roxy sounded like she jumped on the panic wagon again.
"I'll get an ambulance and find Ted."
She wailed out his name. "Ted."
"Stay calm and he'll be there soon."
"He's bleeding. Oh God, he's dying!"
I'd often wanted to slap Roxy, but this time I could probably get away with it. "I thought you said he's dead."
"No, Eldon is dead." Sob, sob.
"Then who is dying?" Maybe Ted was buying drinks at the Long Branch, since it was campaign season. Or visiting his mother in Broken Butte, more than an hour's drive away. I ran through a list of places he might be.
"Ted!" Roxy shrieked into the phone.
That's when her stampeding words started to make sense. "Ted what?"
"He's shot. And there's blood everywhere!"
I dropped the phone and didn't hear whatever else she said.


In Stripped Bare, the first book in the Kate Fox Mystery series, author Shannon Baker weaves an intriguing mystery tale that follows the amateur sleuth adventures of cattle rancher Kate Fox Conner, as she tries to prove the innocence of her husband, Sheriff Ted Conner, and niece Carly Edwards, who have become person of interests in the murder of Carly's grandfather, cattle rancher Eldon Edwards.

Kate Fox Conner's life revolves around working on the Frog Creek cattle ranch and supporting her husband of eight years, Grand County Sheriff Ted Conner. Kate's life is turned upside down when Ted is shot at the murder scene of local cattle rancher Eldon Edwards. Kate finds out that Ted is having an affair with Roxy Edwards, his ex-girlfriend and Eldon's daughter-in-law. And if that isn't enough, Eldon's granddaughter and Kate's niece Carly is also missing, leaving authorities to list both Ted and Carly as person of interests in Eldon's murder. Concern for her husband and niece leads Kate to embark on an amateur investigative adventure to clear their name and find the real killer, even when danger lurks in their Nebraska Sandhills community.

Stripped Bare is an intriguing whodunit tale that easily peaked my interest. This riveting tale has enough quirky characters, witty banter and humor, drama, secrets, betrayals, a growing list of suspects, and surprising twists and turns, that will easily keep you guessing the identity of the murderer. You can't help but get caught up in the drama and calamity that ensues as Kate tries to solve the murder and prove Ted and Carly's innocence. Kate's amateur investigative adventure unfolds with a wonderful balance of comedy, drama, and suspense, that easily left me wanting more. I loved the surprise ending, and I can't wait to read the next installment of this sassy lady's adventures!

I would be remiss if I didn't mention how much I really enjoyed the author's rich description of the midwestern setting. The author transports the reader to the rustic Nebraska Sandhills small town of Hodgekiss surrounded by cattle ranches, railroad tracks, the large Fox clan and memorable townsfolk.

Stripped Bare is a fast-paced suspenseful tale that mystery fans will enjoy reading. 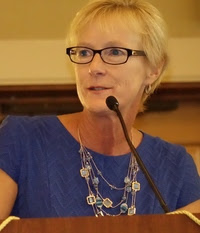 Shannon Baker is the author of the Nora Abbott mystery series from Midnight Ink. A fast-paced mix of Hopi Indian mysticism, environmental issues, and murder. Shannon is an itinerant writer, which is a nice way of saying she’s confused. She never knows what time zone she’s in, Timbuck-Three, Nebraska, Denver, or Tucson. Nora Abbott has picked up that location schizophrenia and travels from Flagstaff in Tainted Mountain, to Boulder in Broken Trust and then to Moab in Tattered Legacy. Shannon is proud to have been chosen Rocky Mountain Fiction Writers’ 2014 Writer of the Year. Visit Shannon at www.Shannon-Baker.com

Posted by Kathleen Higgins-Anderson at 4:11 PM