In association with Providence Book Promotions, Jersey Girl Book Reviews is pleased to host the virtual book tour event for The Test by Author John Lansing! 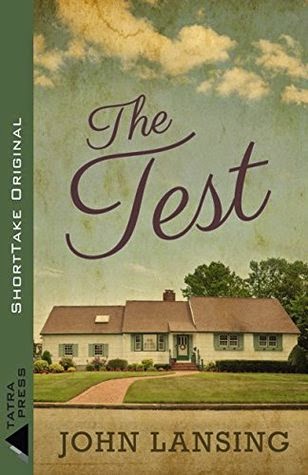 
I wasn’t thinking short story when I wrote what became the central theme of The Test. I was writing a love letter, in e-mail form.

I had just started dating a wonderful woman, and was being met with cautious resistance. Back in my college days, I would have pulled out my Martin G35, sung a few James Taylor songs, and sometimes it would do the trick, and I’d get lucky.

Not being in good voice and rusty with my guitar picking, I decided to write about a walk the two of us had just taken out on the jetty of Marina del Rey.

Vida had been advised that walking backwards for short periods of time would help a back problem she was suffering. With sailboats and yachts making their way past the breakwaters, a startling blue sky, and the Pacific Ocean as our backdrop, she spun around, closed her eyes and held out her hands. I became her eyes and the walk became an exercise in trust.

Later that day, I wrote about that experience, but changed the local. I wrote about the crowds of people we passed walking in Venice, the feelings I had holding the hands of this vision. Then I hit send.

The e-mail did the trick. It was well received, and then, having served its purpose, the story sat on my shelf, gathering dust.

Years later, Vida suggested I revisit the story. I was between projects, fought my own resistance, and gave it a try.

I decided to the change the setting yet again. Vida and I both grew up in the same town, and I had always wanted to explore my youth growing up on the East Coast.

The early 60’s was a tumultuous period of time that held great meaning for me as a teenager. America was on the verge of dramatic change, still immersed in a 50’s sensibility, but moving kicking and screaming toward a social and political revolution.

The Test takes place a few months before the British invasion led by the Beatles, and then our countries shared trauma dealing with the assassination of President John F. Kennedy.

It’s a coming-of-age tale, set on Long Island in 1963 that deals with race, violence, social politics and young love.

John Lansing started his career as an actor in New York City. He spent a year at the Royale Theatre playing the lead in the Broadway production of “Grease.” He then landed a co-starring role in George Lucas’ “More American Graffiti,” and guest-starred on numerous television shows. During his fifteen-year writing career, Lansing wrote and produced “Walker Texas Ranger,” co-wrote two CBS Movies of the Week, and he also co-executive produced the ABC series “Scoundrels.” John’s first book was Good Cop, Bad Money, a true crime tome with former NYPD Inspector Glen Morisano. The Devil’s Necktie was his first novel. Blond Cargo is the next book in the Jack Bertolino series. A native of Long Island, John now resides in Los Angeles.

Disclaimer: I received a copy of the book from the author / publisher in exchange for my honest review and participation in a virtual book tour event hosted by Providence Book Promotions.

A coming-of-age story set in 1950s, small-town Long Island, at time when suburban America is about to undergo seismic societal changes. With this backdrop, a teenage boy falls in love with one of the town's few black girls, a relationship that has repercussions leading to permanent transformations for the couple--and for the town.

The Test by author John Lansing is a wonderful coming-of-age short story that transports the reader back to 1963 in Baldwin, Long Island, where they follow fourteen year old Jack Morgan as he falls for Vida, a pretty African American girl whose family has just moved into town, and their relationship stirs up racial tension among the community ... just as the country is on the cusp of a tumultuous period of time that will ultimately bring social and political changes.

Written in the first person narrative, Jack Morgan is now an adult who travels back to his hometown of Baldwin, Long Island, to settle his parents' estate and finalize the sale of their house. As Jack sits in the driveway of his childhood home, he is usually not one to dwell on his past, but he can't help but take a stroll down memory lane to a November night in 1963 when he attends a weekend dance and asks Vida, a pretty African-Amercian girl who he has an innocent crush on to dance, setting off a controversy over young love against current societal beliefs, racial prejudice and tensions.

The Test is a poignant tale that easily draws the reader into Jack and Vida's story. Author John Lansing weaves a true-to-life short story that is written in a richly descriptive style that transports the reader back to a time period where the country was on the cusp of a change in the social, racial, and political climate. The author realistically captured the essence of that tumultuous period in time, and interwove it with a touching teenage love story that will have the reader experiencing the gamut of emotions. I found myself so captivated with the brief glimpse into Jack and Vida's story, that when I got to the very surprising conclusion, it left me wanting more!

The Test is a beautifully written coming-of-age short story that is full of emotion and drama, it will take the reader for a stroll down memory lane, stir the soul, and leave a lasting impression.

Win An eBook Copy Of The Test

This is a giveaway hosted by Providence Book Promotions for John Lansing. There will be THREE U.S. winners of an ebook copy of The Test. The giveaway is open to US residents only. The tour-wide giveaway begins on April 1st, 2015 and runs through May 2nd, 2015.

Posted by Kathleen Higgins-Anderson at 1:05 AM

We Came Here To Shine by Susie Orman Schnall

The Summer Villa by Melissa Hill