In association with Pump Up Your Book, Jersey Girl Book Reviews is pleased to host the virtual book tour event for The Redeeming Power Of Brain Surgery by Author Paul Flower! 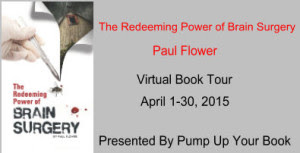 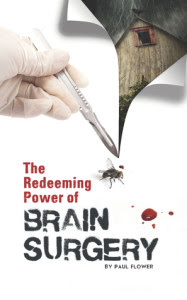 
Disclaimer: I received a copy of the book from the author / publisher in exchange for my honest review and participation in a virtual book tour event hosted by Pump Up Your Book.

Jesse Tieter, M.D. has carefully constructed the ideal life. But lately, neither his Chicago-based neurology practice nor his wife and son are enough to suppress the memories that have haunted him since he was a little boy. He can't stop thinking about that summer day in 1967 when his father died.

So Jesse is heading back. Back to the town and the place where a long-repressed horror occurred. Back to make sure his twin keeps the family's secret buried.

But what will he uncover along the way?


His son’s hand felt like a lie. Lately, to him, everything felt this way. The look of sadness on his wife’s face, the burn of a drink in his throat, the whine of a saw in the O.R.; nothing seemed true. Nothing was real anymore. He felt out of balance, too. Even now, the school building, the flag slapping against the heavy fall sky¬¬—everything was tipping away from him. It was as though he’d gotten up that morning and screwed on his head carelessly, as though he hadn’t threaded it good and tight. While shaving, he’d cut himself, a discrete, semi-intentional knick just under the curve of his chin. He’d stood there like an idiot, eyes feeding the message “blood” to his brain, nerve endings responding with “pain” and the logic center unable to formulate a response.

“Pick up the pace. Chop chop. Move out.”

Now, as he snaked through the crush of other parents and children, he had to look down to convince himself the boy was there, attached to the hand, flesh and bone. The red hair, “his mother’s hair” everyone called it, was sliced by a crisp white part; his head bounced in beat with his sneakered feet. The child was so painfully real he couldn’t be a lie.

It amazed him that his son looked so much like his wife, especially the tiny mouth, the way it was set in a crooked, determined line. He was a kid who liked to have fun, but he could be fierce. Today, the challenge of a new school year, of third grade, had brought out the determined streak. This was good. They would need that streak, he and his mother would.

“Whoa.”  The tiny hand now was a road sign, white-pink flesh facing him, commanding him. Far enough. He obeyed. Squatting, arms out for the anticipated embrace, he suddenly wanted to tell everything. Tears swam. His throat thickened. The earth tilted and threatened to send him skittering over its edge. There was the slightest of hugs, the brush of lips on his cheek then the boy was off, skipping toward the steps as though third grade challenged nothing, caused no fear, as though the world was in perfect balance.

He walked back to his Lincoln Navigator with the exaggerated care of a drunk who didn’t want anyone to know his condition. He got behind the wheel and suddenly was no longer in his 50s; he felt 16 and too small, too skinny and insignificant to handle the giant SUV.

He nosed the vehicle toward home, alternately trembling and gripping the wheel as he merged with the morning traffic. The plan struck him now as odd and silly, the challenges too great. His hands, already red and scaly, itched fiercely. Get a grip, he told himself. Get a grip.

His tired mind—when was the last time he’d really slept well?—jumped from one stone of thought to another. Was everything covered at work? The bills—had he paid them all? Did his wife suspect anything? Yes. No. Absolutely. Of course not. Relax. Relax. He left the expressway at the exit that took him past their church and wondered if the church, too, was a lie. What of the wedding there so many years ago?

Through a stoplight and past a Dunkin’ Donuts, his gaze floated around a corner. A flash of inspiration—hit the gas. Let the tires slide and the back-end arc around. Let physics have its way until the big vehicle broke free from the grip of gravity and danced head over end, coming to a stop with him bleeding and mercifully, gratefully dead inside.

No. He had something to do. Had he figured the angles right? Gotten the plan tight enough?

A horn jabbed through his reverie. He had drifted into the turn lane of the five-lane street. He jerked the wheel and cut across traffic into the right lane. Tires screeched, horns screamed. A black Toyota streaked past on his left, the driver’s fist, middle finger erect, thrust out the window.

Rage, sharp and bitter, bubbled in his throat. He hesitated, then jammed his foot on the accelerator, cut the wheel hard, and sent the Navigator careening into the left lane.

A staccato barrage of profanity pounded the inside of his skull. He bit his tongue to keep the words in. His heart hammered and a familiar, dizzying pressure filled his ears. The SUV roared ahead, past one car, past a semi then another car, quickly closing the gap on the speeding Toyota. He couldn’t see the car’s driver but he could imagine him, some stupid, simple-minded schmuck, eyes locked on the rear-view mirror as the lumbering Lincoln grew larger, larger, larger. The instant before he would slam into the smaller vehicle, he jabbed his brake and turned again to the left. There was a squeal of tires and more horns bleating behind him; the semi rig’s air horn bellowed angrily past. Ramrod straight, eyes fixed ahead on the now-slow-moving car disappearing tentatively around a curve, he brought the Navigator to a shuddering stop in the center lane. He tensed and waited for the resounding WHUMP of a crash from behind. None came. Face flushed and eyes gleaming, suddenly rejuvenated, he accelerated quickly then eased the Navigator back into the flow of traffic—no looking back.

The Redeeming Power Of Brian Surgery is a riveting psychological thriller that will keep the reader in suspense and sitting on the edge of their seats.

Author Paul Flower weaves a gritty dark tale of suspense that follows the complex story of Dr. Jesse Tieter, M.D. and how his ideal life is turned upside down when his attempts to suppress the haunting memories of his past are brought to the surface when he travels back to his small Michigan hometown and faces his estranged fraternal twin brother and deeply buried family secrets.

This is a compelling, intricate, and fast paced story that alternates between the past and the present. It has enough richly vivid descriptions of the devious and haunting events in the family's past that will send chills down your spine. I loved how the author allows the reader to delve into the twisted minds of the twins, the complexity of their dysfunctional relationship is palpable, and it lends credence to the old adage that people are not always what they appear to be.

The Redeeming Power Of Brain Surgery is a gritty dark tale that will take the reader on an exhilarating roller coaster ride. There is enough drama, suspense, and intriguing twists and turns that will keep the reader engaged and guessing what will happen next until the surprising and climatic conclusion. 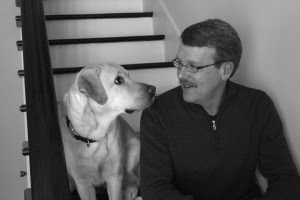 Paul Flower is an author, advertising copywriter/creative director and a journalist.

He has written and produced award-winning advertising for print, radio, television, outdoor, the Web––really, just about every medium––for business-to-consumer and business-to-business accounts.

His news features have appeared in regional and national magazines. His first novel, “The Redeeming Power of Brain Surgery,” was published in June 2013 by Scribe Publishing. Visit Paul’s website at paulflower.net.

Click on the above link to view the tour schedule.

Posted by Kathleen Higgins-Anderson at 12:23 AM