In association with Pump Up Your Book Tours, Jersey Girl Book Reviews is pleased to host the virtual book tour event for The Scent of Humanity by Author Margay Leah Justice! 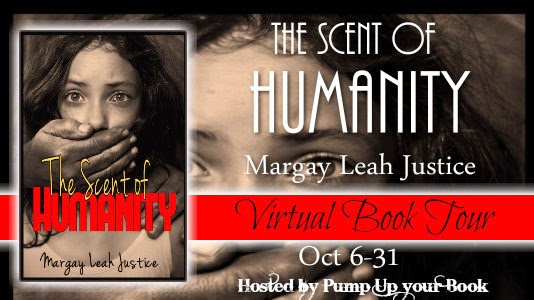 
Let’s do something fun! Everyone seems to love Top 10 lists, so let’s do this. Here are 10 things you didn’t know about me, Margay Leah Justice:

I used to want to be a ballerina and spent most of my childhood in dance class.

I come from a large family and suffer from middle child syndrome.

I’ve had many different types of jobs, one of them as an aerobics instructor.

I am related to some famous (at least around these parts) writers on my maternal grandmother’s side, James Russell Lowell, Amy Lowell and Robert Lowell.

One of my ancestors brought the mills to the states and had a town named after him – Lowell, MA.

I have traveled up and down the eastern seaboard, but have never been to the west coast or anywhere out of the country.

I always dreamed of living in Paris, France someday.

My all time favorite star male is Johnny Depp and female is Julia Roberts.

My first name, though not intentional, is also the name of a type of cat from South America and I discovered this by accident. My older sister was always competitive and kept trying to make bets with me. One day, frustrated, I bet her our allowance that my name would be in the dictionary and hers wouldn’t – and since her name is Anne, I thought I had a pretty good shot at that last part! Imagine my surprise when my name actually was in the dictionary! Won that bet!

So thank you for playing along and Happy Reading!

Descended from the same bloodline that spawned the likes of James Russell, Amy and Robert Lowell, Margay Leah Justice was fated to be a writer herself from a young age. But even before she knew that there was a name for what she was doing, she knew one thing: She had a deep and unconditional love for the written word. A love that would challenge her in times of need, abandon her in times of distress, and rediscover her in times of hope. Through her writing, Margay has learned to cope with every curve ball life has thrown her, including the challenges of single parenting, the harsh realities of living in a shelter, coping with the diagnosis of Multiple Sclerosis, and the roller coaster ride of dealing with a child who suffers from bipolar disorder. But along the way she has rediscovered the amazing power of words.

Margay currently lives in Massachusetts with her two daughters, two cats, and a myriad of characters who vie for her attention and demand that their own stories be told. In her spare time, she is an avid knitter, knitting her way through a stash of yarn that almost rivals her tbr pile!

Her latest book is the romantic suspense/women’s fiction, The Scent of Humanity. 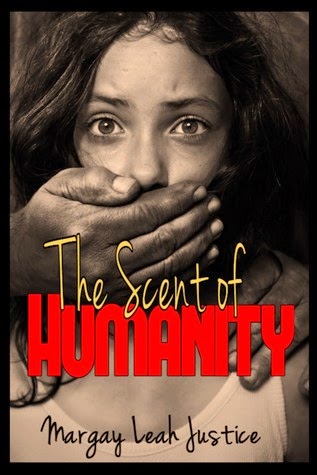 
Disclaimer: I received a copy of the book from the author in exchange for my honest review and participation in a virtual book tour event hosted by Pump Up Your Book Tours.


Discuss this book at PUYB Virtual Book Club at Goodreads.

Lightning doesn’t strike the same place twice. In theory. But in one small town, in one family, that theory is put to the test.

Growing up in a rural town in Massachusetts was supposed to be safe, but for Silvie Childs, that safety was shattered by a kidnapping attempt that forever changed her life. Now, nearly twenty years later, that sense of safety is challenged again by the kidnapping attempt on her young niece, and Silvie is left struggling with one question: How can something like this happen twice in one family?

It is a dilemma shared by Nick Fahey, the detective assigned to the case. Arriving on the scene of the abduction attempt, Nick expects to run a routine investigation. Until he meets the victim, the niece of a woman he once considered a dear friend. Unfortunately, these days Silvie Childs can barely stand the sight of him.

Once there was a time when Silvie Childs worshipped Nick Fahey, believing he could do no wrong. Until the accident that nearly killed her brother; the accident that Nick reportedly caused. Coming on the heels of her own near abduction, the accident skewed Silvie’s ability to trust men – especially Nick. But now, with the attempt on her niece’s safety, Silvie finds herself in the untenable position of having to trust Nick to bring the kidnapper to justice.

That trust is severely tested when, after only two months, the case is closed for lack of new evidence. Feeling betrayed by the system in which she works as a paralegal and by Nick, Silvie takes matters into her own hands. Contacting local news stations to generate interest in the case, allowing herself to be filmed hanging sketches of the suspect on telephone poles, she will risk her own safety to protect that of her niece. When her efforts re-open the wounds of her past, she is once again forced to put her trust in the one man who still has the power to hurt her – Nick.

“What’s this?” he asked, cupping her face in his hand and running the thumb along the lower edge of her too-full lips. “A little hint of maturity? Silvie Childs apologizing?”

She nipped his thumb at the jibe, not hard, just enough that he hissed out a breath in reaction. All hint of humor fled from him. He was intent, serious now, every nerve in his body on high alert. “Is that how you want to play it?” he whispered, his voice guttural. “Huh?” He moved a little closer to her, maneuvering her up against the open door. Slipped his thumb between her lips, parting them. “You think we’ve danced around this enough for one day, hmm?”

“I don’t know what you mean.” Her lips brushed against his thumb as she spoke, igniting a spark within him. Interesting.

“Liar,” he said as he dipped his head close enough to replace his thumb with his lips. But he didn’t. Instead, he skimmed his lips along her cheekbone to her right ear, flicked his tongue along the rim of the opening. Into her ear, he whispered, “When you stop lying to yourself, I’ll give you what you want.”

She grabbed the hand he still cupped her face with, the gesture almost – convulsive. Hmm, what was that about? Her breath in his ear sent a shiver throughout his body. “And what,” she whispered against his cheek, “do you think I want?”

He nipped her earlobe, smiled at her shocked gasp. Soothing the nip with a flick of his tongue, he murmured, “Oh, I don’t know.” Into her ear, “Think about it.” Sliding his lips along her cheek as he withdrew, he couldn’t resist allowing the tip of his tongue to flit across her lips in parting. When she opened her mouth as if in protest, he warned, “Uh-ah, you’ve got to stop lying to yourself first.”

She slipped her fingers into his hair, grabbing hanks of it to anchor his head and prevent his retreat. He resisted the urge to smile – and to kiss her when she made the overture to him. He merely slipped his thumb back over her lips, using it as a barrier between them. When she cast him a pleading look, he asked, “Do you still hate me?”

“Yes,” she admitted when he slid his thumb away, releasing her lips from captivity. “More than ever.”

He smiled and angled his head, as if preparing to kiss her. “Why?” he asked instead.

“Mm,” he murmured, accepting that as her answer. “And who do you hate more right now?” He dipped his head a little closer. “Me, because I won’t do what you want – or you, because you want it?”

“Me, all me,” she whispered as she swooped in close and took what she wanted from him. What he allowed her to take from him. Voraciously. Good Lord, he thought moments before she pulled away, shock at her own actions clearly written on her face. Where had she learned to kiss like that?

“Ah, Silvie,” he said, dragging his thumb over her full lower lip before he favored her with a lingering, open-mouthed kiss, “I don’t think you hate me as much as you think you do.” He pulled back before she could respond – to his words or his kiss – and jogged down the three short steps from her front porch to the walkway. “Goodnight, Silvie,” he called over a shoulder. “Lock the door behind me.”

For Silvie Childs, her traumatic past comes back to haunt her twenty years later with the attempted abduction of her young niece.

For Detective Nick Fahey, the attempted abduction investigation case that he is assigned brings him face to face with a once very close friend with a shared traumatic past.

For both Silvie and Nick, the dilemma of the attempted abduction case brings to the surface their traumatic past, lack of trust, and an undercurrent of personal feelings. When Silvie takes the case into her own hands, can she learn to let go of the past, reach out, and trust Nick like she had twenty years ago in order for them to be able to work together towards getting justice?

In The Scent of Humanity, author Margay Leah Justice weaves a riveting romantic suspense novel that easily draws the reader into Silvie and Nick's story as they work through their painful past and focus on getting justice for the attempted abduction of Silvie's young niece.

Set in the suburbs of Massachusetts, the reader is easily drawn into this riveting story that is full of mystery, suspense, drama, and old heartache. The author does a wonderful job of mixing Silvie and Nick's painful backstory with the suspense of the present and eerily similar attempted abduction case of her niece. This multi-layered and complicated story has enough intriguing twists and turns that keeps the reader guessing and wondering what would happen next as Silvie and Nick put aside their painful past, and learn to work together on investigating the case. You can't help but become captivated by Silvie and Nick's connection and the intensity of the investigation!

With a realistic cast of characters; witty dialogue and dramatic interactions; a richly detailed description of the setting; and a riveting romantic suspense storyline that provides enough thrills and chills until the surprising conclusion, The Scent of Humanity will take the reader one one hell of roller coaster ride!

Monday, October 6
Interview at Beyond the Books

Wednesday, October 8
Interview at As the Page Turns

Posted by Kathleen Higgins-Anderson at 1:51 AM