Jersey Girl Book Reviews welcomes back Heather Thurmeier, author of Stuck On You! 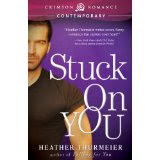 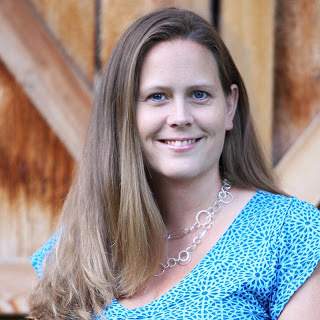 Thank you so much for having me on your blog again, this time to chat about my new release and the second in the Reality TV Romance trilogy, Stuck On You.

Stuck On You is Paige’s turn to be in the spotlight, only this time it’s not to date a bachelor with a bunch of other women. This time Paige is on an adventure reality TV show similar to The Amazing Race but with a few twists that make it something new and different. Last time, Paige had to work on her own to try to “out-date” the other girls. Is that even a thing? LOL. But this time it works to her benefit to form an alliance with another team… A team of mountain climbers.

Can I just take a moment to say yum? YUM!

Miles is a mountain climber with the body to prove it and Paige can’t wait to climb his mount… Wait, what was I saying? Right. Miles has climbed the highest peaks in the world, but his biggest challenge is still to come. Somehow he has to figure out how to win the game while being completely distracted by Paige. Easier said than done. Both Miles and Paige know that working together in an alliance will work to their benefit—if they can keep their hands off each other and their heads in the game.

I’ve watched a lot of reality TV and I have to say, rarely do alliances work out the way the contestants involved in the alliance think it will. Once in awhile teams will form a bond that is so strong it takes them all the way to the end of the game. But I’d say more often than not, someone on the alliance ends up yelling, “I can’t believe you stabbed me in the back just to win!” Really? I always wonder why they don’t know in advance to expect that sort of outcome. Do these contestants really go on a reality TV show never having watched one before? Do they really not know the other contestants are going to lie, manipulate, and switch sides just to win? Don’t they know that they too are going to do all of those things themselves?

Do you think Miles’s team and Paige’s team will be able to work together in their alliance to make it all the way to the end of the game and win? I could tell you, but I won’t. You’ll have to check out Stuck On You to find out how things play out for Miles and Paige…And I don’t think you’ll see this ending coming!

Heather Thurmeier
~Heart, humor and a happily ever after

Heather Thurmeier is a lover of strawberry margaritas, a hater of spiders, and a reality TV junkie. Her passion is contemporary romance—writing stories filled with laugh out loud moments, uber-hunky heroes, sassy heroines, and always a happily ever after. Author of romantic comedies: Meadow Ridge Romance series, Bunny Hills and Bikinis, and the Reality TV Romance trilogy. You can find out more about Heather's books, news and giveaways by visiting her blog: heatherthurmeier.com.

"Heather Thurmeier's hunky heroes and feisty heroines will have you laughing out loud, falling in love ... and coming back for more!" ~ Carly Phillips, NY Times Bestselling Author

Love and Lattes, Love on Landing, Love or Luxury, Bunny Hills and Bikinis, Falling for You, Stuck on You ~ Available now! Lost without You ~ Coming Soon!

If being forced to team up with reality TV’s favorite bad girl wasn’t enough, falling for her brother might just make this reality show a real nightmare.

Paige Anderson agrees to be on a new reality show called Treasure Trekkers, a show where contestants use handheld GPS units to find hidden caches filled with prizes, with her good friend Cassidy. But when Cassidy is unable to compete, Chip Cormack, the show’s producer, steps in with a last-minute replacement to be Paige’s partner—Zoe Oliver, reality TV’s favorite bad girl.

Jack Miles (aka Miles) is a mountain climber with the body to prove it. Miles convinced his climbing partner Ben to come on the show with him for one reason—to prove to Ben that they can still hike together, regardless of the fact that Ben lost his foot in a tragic accident. Miles isn’t about to let anything get in his way of winning—not even beautiful Paige.

But when Miles and Paige are thrown into an alliance with their teammates, working closely together leads to more than just good strategy. Can Paige steal Miles’ heart while surviving Zoe long enough to win the game?

“Never could resist a pretty brunette in heels, could you?” Ben laughed and rolled over. “Just don’t let it screw up our partnership with them. On second thought, maybe we shouldn’t make an alliance with them if you’re starting to fool around with Paige. It could complicate things more than it’s worth.”

“It was one kiss, not a complication.”

“Still. Maybe we’re better off on our own.”

Miles glanced over to Ben. What was the right decision for their team? Working with the girls could lead to complications, especially if he had to watch Paige in those heels and yoga tops everyday. But the girls were also pretty stubborn and that might be just what they needed to get enough caches to win.

Not to mention, the thought of Paige falling down another hill without anyone to rescue her but Zoe made him break out in a cold sweat. What if something worse happened and he wasn’t there to help?

“An alliance with the girls is our best option right now if we really want a chance to win. Even if we only pair up with them long enough to collect most of the caches they’ve already gotten, it will be worth it for the points alone. After that point, we can reevaluate the situation.”

“I’ll give it another day, but if working with the girls holds us back in any way, we’re on our own again.”

It really was the only option. That way he could get Ben closer to winning. Miles could already see the spark of excitement coming back to Ben. If they won, it would be all it took to make Ben realize how much he’d missed having a little more adventure in his life.

And if he got to flirt with Paige a little more along the way, that was pretty okay too.

After her unsuccessful stint as a contestant on the bachelor reality TV show The One, Paige Anderson has agreed to compete in another reality show, a geocaching adventure show called Treasure Trekkers, similar to The Amazing Race. Thinking that she would be partnered with her friend Cassidy Quinn, who was the winner of The One, Paige couldn't wait to spend some time with her friend while racing for treasures in caches hidden around the NY metropolitan and lower Hudson Valley areas. But a sudden twist to the game came right before it started, when Cassidy had to bow out of the competition, and suddenly Paige found herself partnered with Zoe Oliver, the bitchy bad-girl nemesis from The One. And if that isn't enough, Paige finds herself attracted to a hunky muscled mountain climber named Jack Miles, who is partnered with his best friend and climbing partner Ben. Can Paige win the race and Jack's heart?

In the second book of the Reality TV Romance Trilogy, author Heather Thurmeier once again transports her readers into the world of reality TV with another tale of romance and adventure. In Stuck On You, the story picks up where it left off in book one, Falling For You, with the focus of the story on the lovable but shy Paige Anderson. With a cameo appearance from Cassidy Quinn, the main character in the first book; returning characters, Zoe, Evan, Chip and Spencer; and new characters Jack Miles and Ben; the reader follows the ten teams who embark on a twenty-eight day endurance adventure in the search to find as many of the 500 treasures hidden in caches only using a GPS, in order to gain the most cumulative points and win the half million dollar grand prize. And it wouldn't be a reality TV show if there wasn't some flirting and romance thrown into the mix!

This was such a fun story full of adventure, humor and romance. You can't help but get caught up in the action of the geocaching adventure where the teams have to overcome challenges and obstacles; and then add in the steamy attraction between Paige and Jack into the mix, and you have a story that keeps you entertained and turning the pages.

I had a mixed reaction to Paige, there were times I was in her corner and then there were times I wanted to shake the hell out of her and tell her to get a backbone! But when you add hunky Jack Miles as a love interest, I found myself wanting Paige and Jack to get together. Jack oh Jack, you stole my heart! I loved the story surrounding his past and the awesome friendship he has with his best friend Ben. And I would be remiss if I didn't mention my favorite character Zoe ... oh my goodness, how I so wanted to hate this bitchy girl, who knew she hid her true sweetness?! I'm a converted fan and can't wait to read her story in the third book of the trilogy, Lost Without You.

With a wonderful cast of characters who are real, have flaws, and are easy to relate to; engaging dialogue and quirky interactions; a richly descriptive NY setting for the geocaching adventure; and a steamy romance that will make you sigh, Stuck On You is an entertaining read that will keep you stuck on the trilogy!

Stuck On You is the second book in the Reality TV Romance Trilogy. While each book can be a stand alone read, why not take the time and follow it in sequence, as one book flows so smoothly into the next.

Posted by Kathleen Higgins-Anderson at 5:13 PM