Life's a Beach by Claire Cook 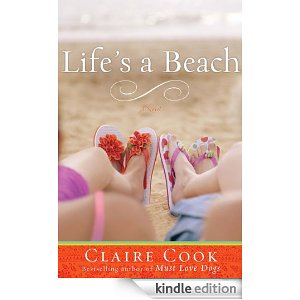 Amazon.com Book Description:
A romantic comedy about Ginger Walsh, 41, a relationship-challenged single woman, who has ditched her job in sales and moved above her parent's garage aka FROG (Finished Room Over Garage) with a cat she calls Boyfriend— despite (or because of) her casual on-again-off-again relationship with alluring glassblower Noah.

Along with her quirky-to-put-it-mildly extended family, a dumpster-picking father, a Kama Sutra T-shirt wearing mother, and a sarcastic sparing partner for a sister, life's a bit of a beach these days for Ginger, who's hoping for a more fulfilling life as a sea glass artist, but instead is babysitting her sister's kids.
As big sister Geri gets anxious about her impending 50th, their parents decide to sell the house, and Geri's second-grader Riley lands a small role in a horror movie being filmed in their quaint New England town. Ginger babysits Riley on the set and meets a gaffer who may be charming enough to make her forget all about Noah.

My Book Review:
I have really come to love Claire Cook's witty style of writing, and with Life's a Beach, she doesn't disappoint her readers. From the opening chapter, the sarcastic wit leaps off the pages and had me laughing as I read about Ginger and her family. The storyline with it's set of characters will have you laughing, but I have to admit that the middle of the book (the shark movie portion) was a little bit drawn out for my taste, and Ginger's ongoing "I'm single and I don't know what I want to be when I grow up" lifestyle predictament was starting to bore me. I did love the sarcastic sisterly sparing matches that Ginger and Geri had throughout the book, they kept me in stitches, as well as the quirky antics of her mom and dad. I thought Ginger's and Noah's relationship was rather boring and the author could have spiced up the advances of the gaffer to make it more exciting, but I do have to admit that I did like the ending of the story. Overall, while I did like the story, it just wasn't my favorite Claire Cook book.
RATING: 3 STARS ***

Posted by Kathleen Higgins-Anderson at 11:35 PM