In association with Partners In Crime Virtual Book Tours, Jersey Girl Book Reviews is pleased to host the virtual book tour event for Inside Passage by author Burt Weissbourd! 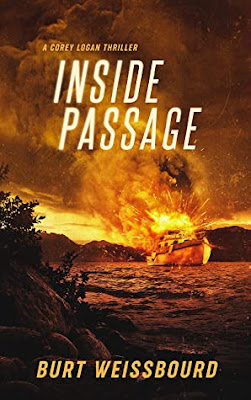 Inside Passage by Burt Weissbourd
Book 1: Corey Logan Thriller Trilogy
Publisher: Blue City Press
Publication Date: October 14, 2020
Format: Hardcover - 268 pages
Paperback - 288 pages
Audiobook - 10 Hours 23 Minutes
Kindle - 5954 KB / 289 pages
Nook - 3 MB / 268 pages
ISBN (Hardcover): 978-0985490232
ISBN (Paperback): 978-1733438247
ASIN (Audiobook): B08NTZ2FW2
ASIN (Kindle): B08CQHFNZ1
BNID: 978-0988931213
Genre: Crime Thriller
Buy The Book:
Amazon (Free On Kindle Unlimited)
Barnes & Noble
Audible Audiobook
IndieBound
Goodreads
Buy The Trilogy: Corey Logan Trilogy
Book 1: Inside Passage
Book 2: Teaser
Book 3: Minos
Amazon
Barnes & Noble
IndieBound
Goodreads
Disclaimer: I received a copy of the book from the author / publisher in exchange for my honest review and participation in a virtual book tour event hosted by Partners In Crime Virtual Book Tours.
Book Description:
Corey Logan was set up. She knows Nick Season’s terrible secret. Coming home from prison, all Corey wants is to be with her son. To get him back, she needs to make a good impression on the psychiatrist evaluating her. Dr. Abe Stein doesn’t believe she was framed — until his well-heeled mother falls for the charming state attorney general candidate, Nick Season. As the dogs of war are unleashed, Corey and her son run for their lives — taking her boat up the Pacific Northwest’s remote Inside Passage.
“A stunning, fast paced thriller that took me on an intense ride and kept me on the edge of myseat the entire way through … If you love beautifully executed thrillers that will play with your mind as well as your heart, this is the book for you.” ~ Midwest Book Review
Book Excerpt:

“Wouldn’t you like to get married in your own backyard?”

“Why not? Because Nick Season says you can’t. You have the right to live the life you want to live. Don’t give it up for that son of a bitch. Hell no. You don’t have to do that.” Abe leaned closer. There it was, those laser-like light blue eyes. “It won’t be easy, but together, we can figure out what to do. You and I can do this. We have to.”

“My God, what are you thinking? This isn’t like psycho-therapy.” She held his eyes. “We can’t ‘figure it out’ or ‘work on it.’ It’s not a head game. We have no evidence. Nothing. Nick’s a foolproof liar and a stone-cold killer. And he’s going to be Washington’s state attorney general.”

“And he has to be stopped.” Abe looked into their fire. “It’s not just about what you’d have to give up … think about what he’ll do if he ever finds out that you and Billy are alive. And though you might be okay for a year, or even two, eventually, he’ll start to wonder. And then to worry. It’s who he is. You’ve told me that. And then he’ll never stop checking. He’ll have me followed. Every year, he’ll run your prints, and Billy’s, through some Canadian database. And that’s just the beginning … unless we stop him.”

“And how do you propose to do that?”

Abe’s bushy brows furrowed in a “V” until they almost touched. “I understand the problem now.” They touched. Corey had never seen that. Very cool. He meant business. He turned to her, full face. “To begin, I’ll comb my hair and look this devil in his shiny black eyes.”

What? What was that? Corey was dumbstruck. Eventually, she softly mouthed, “What?” And louder, before he could answer, “Aren’t you afraid of him?”

“He’s very frightening, and I’m painfully aware of what’s at stake. And of course I see how very dangerous he is and yes, that scares me.” He scowled. “But I have other feelings that are even stronger than my fear.”

“What does that mean?”

“What I’m afraid of, what keeps me up at night, is losing you. Nick wants to kill the person I love most in the world. That makes him my archenemy, my nemesis. What I feel for Nick is inexhaustible rage.” He tapped his pipe against the log, emptying it into the sand, then he carefully set it down. When he looked up, his expression had turned fierce. Abe took both of her hands. “Nick Season be damned!”

“You’re being crazy.” She had never seen Abe like this.

“No, I’m telling you how I feel. I want to marry you Corey. I want to live with you and Billy in Seattle. I want to go to parent night at Billy’s school. I want to take you guys to dinner at Tulio and for pizza at Via Tribunali. I want to fish at your favorite spots near Bainbridge —”

“He’ll kill us all.” And Abe was really scaring her.

“I have to keep that from happening.”

“This isn’t a storybook. Nick isn’t like anyone you know. And this isn’t an insight kind of deal. Look what happened the last time you tried to help. They almost got Billy, and I had to kill someone. Look what almost happened last night. This time you and Billy and I, we could all die. Do you understand that?”

“Working on it? How? You’re going to comb your hair? Look this devil in his shiny black eyes? What is that about?”

Abe considered her question. “It’s a way of starting.”

Corey put her head in her hands. She didn’t know what to say.

My Book Review:
In Inside Passage, book one of A Corey Logan Thriller Trilogy, author Burt Weissbourd takes the reader behind the scenes of a riveting thriller as single mom Corey Logan engages in a dangerous cat-n-mouse game with a ruthless and powerful man from her past, who is determined to permanently silence her.

Inside Passage is a riveting thriller that easily draws the reader in from the start. The author provides the reader with a fascinating, multi-layered, and richly detailed story set in panoramic Seattle and the Pacific Northwest Inside Passage. This exciting story takes the reader on an exhilarating roller coaster ride as Corey engages in a very dangerous cat-n-mouse game with Nick Season, a very powerful and ruthless man from her past, who is determined to stop at nothing to silence Corey permanently before she shares his dark secret from the past, and ruins his chance of being elected State Attorney General. When Corey comes face-to-face with Nick's attempt to silence her through his henchmen, Corey and her fifteen year old son Billy run for their lives sailing up the Pacific Northwest Inside Passage, but she didn't realize that her psychiatrist Dr. Abe Stein has other plans, he is determined to help Corey overcome her past and rebuild her relationship with her son.
There is enough drama, secrets, deception, tension, humor, and surprising twists and turns that definitely will keep the reader sitting on the edge of their seat, and guessing how this story will turn out. I loved the drama and budding relationship that Corey and Abe shared, it was a great way of interweaving the tension and drama of teaming up together to confront Corey's past, with a touch of unexpected romance added into the mix.

Inside Passage is a well-written, fast paced story that left me interested in finding out what Corey's next adventure will be in Teaser, the second book in the trilogy. 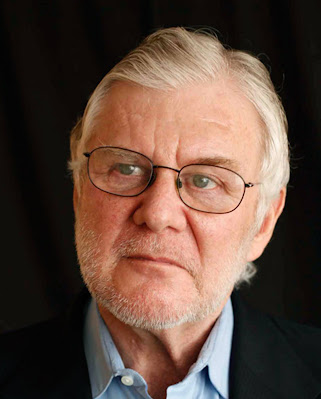 Burt Weissbourd is a novelist, screenwriter and producer of feature films. He was born in 1949 and graduated cum laude from Yale University, with honors in psychology. During his student years, he volunteered at the Museum of Modern Art in Paris and taught English to college students in Thailand. After he graduated, he wrote, directed, and produced educational films for Gilbert Altschul Productions. He began a finance program at the Northwestern University Graduate School of Business, but left to start his own film production company in Los Angeles. He managed that company from 1977 until 1986, producing films including Ghost Story starring Fred Astaire, Melvyn Douglas, John Houseman, Douglas Fairbanks Jr., and Patricia Neal, and Raggedy Man starring Sissy Spacek and Sam Shepard, which The New York Times called “a movie of sweet, low-keyed charm.” In 1987, he founded an investment business, which he still runs. Burt’s novels include the thrillers Danger in Plain Sight, The Corey Logan Trilogy (Inside Passage, Teaser and Minos), and In Velvet, a thriller set in Yellowstone National Park.
Author Website
Amazon Author Page
BookBub
Facebook
Instagram
Twitter
Goodreads

This is a rafflecopter giveaway hosted by Partners in Crime Virtual Book Tours for Burt Weissbourd. There will be 5 winners of one (1) Amazon.com Gift Card each. The giveaway begins on November 1, 2020 and runs through December 2, 2020. Void where prohibited.
a Rafflecopter giveaway 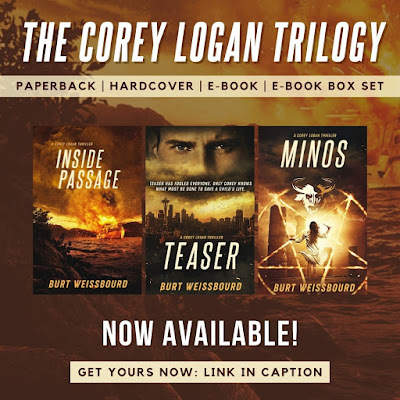