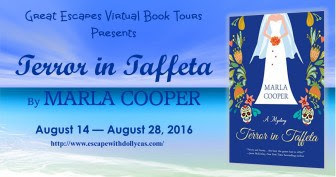 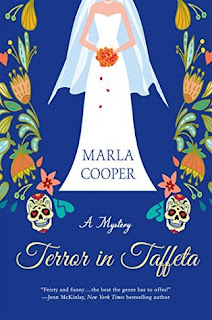 
Disclaimer: I received a copy of the book from the author / publisher in exchange for my honest review and participation in a virtual book tour event hosted by Great Escapes Virtual Book Tours.


Wedding planner Kelsey McKenna is just a few hours away from wrapping up her latest job: a destination wedding in the charming, colonial Mexican town of San Miguel de Allende. The reception is all set up, the tequila donkey is waiting outside, and the bride and groom are standing on the altar, pledging their eternal love. But just as the priest is about to pronounce them husband and wife, one of the bridesmaids upstages the couple by collapsing into a floral arrangement, a definite wedding “don’t.” Kelsey soon discovers that the girl hasn’t just fainted–she’s dead.

Losing a bridesmaid is bad enough, but when the bride’s sister is arrested for murder, the demanding mother of the bride insists that Kelsey fix the matter at once. And although Kelsey is pretty sure investigating a murder isn’t in her contract, crossing the well-connected Mrs. Abernathy could be a career-killer. Before she can leave Mexico and get back to planning weddings, Kelsey must deal with stubborn detectives, a rekindled romance, and late-night death threats in this smart, funny cozy mystery debut.


In Terror in Taffeta, the first book in the Kelsey McKenna Destination Wedding Mystery series, author Marla Cooper weaves an intriguing cozy mystery tale that follows the amateur sleuth adventures of wedding planner Kelsey McKenna as she finds herself with the added duty of investigating the murder of a bridesmaid.

Set in the colonial town of San Miguel de Allende, Mexico, Kelsey has coordinated the destination wedding of Nicole Abernathy and Vince Moreno. The wedding plans are going as expected until bridesmaid Dana Poole drops dead during the wedding service, and the bride's sister Zoe is arrested for the murder. And if you think that isn't bad enough, add in a momzilla, who demands that Kelsey fix the mess that they find themselves in while being detained in Mexico!

Terror in Taffeta is a captivating and fast-paced whodunit tale that has enough quirky characters, witty banter and humor, drama, intriguing twists and turns, and conspiracy theories that will keep you guessing the identity of the murderer. You can't help but get caught up in the drama and calamity that ensues as Kelsey tries to solve the case of the bridesmaid murder. Kelsey's amateur investigative adventure unfolds with a wonderful balance of comedy, drama, and suspense that easily kept me guessing, and left me wanting more. I would be remiss if I didn't mention how much I enjoyed the rich description of the wedding destination setting of San Miguel de Allende, Mexico, it sounds like it is a wonderful place to have a wedding!

Terror in Taffeta is an entertaining cozy murder mystery that will easily engage you to join Kelsey in her latest wedding destination adventures! 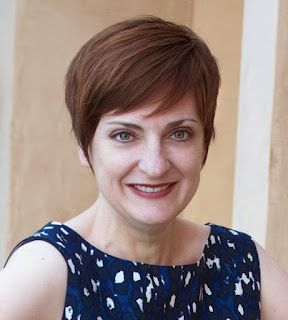 As a freelance writer, Marla Cooper has written all sorts of things, from advertising copy to travel guidebooks to the occasional haiku. But it was while ghostwriting a nonfiction guide to destination weddings that she found inspiration for her current series starring destination wedding planner Kelsey McKenna. Originally hailing from Texas, Marla lives in Oakland, California, with her husband and her polydactyl tuxedo cat.

Posted by Kathleen Higgins-Anderson at 12:02 AM