In the early morning hours of June 6, tens of thousands of boys from the shores of Maine, the rivers of Mississippi, and the lakes of Minnesota were taking a boat ride that would go down in history. With the ocean spray in their faces and hearts practically beating out of their chests, American G.I.s peers through the mist and saw the beaches of France. The Allied invasion of Hitlers Europe was on!

A skinny kid from Philly checked his rifle for the umpteenth time and swallowed hard. A strip of beach code named Utah lay just ahead....

The 1944 D-Day landings preserved freedom all over the world and affected countless individual lives including G.I. Joe and his wife, Lillie.

After the war, G.I. Joe and Lillie settled into a life that included two children. Old wounds, though, never quite let G.I. Joe leave France. Nightmares and crippling injuries left him with only one true friend, but she was all he'd ever need.

Lillie embarked on a decades-long love affair, from the moment she saw that skinny boy from Philly in an army hospital. Five days of courtship and 55 years of marriage strengthened by faith saw to that. Lillie prayed daily for her husband and children in the difficult years ahead. Together, they made it all the way home.

In Lillie's America, it was sacrifice that preserved cherished freedoms, and loyalty kept families united and strong. Lillie's steadfast faith and heartfelt devotion is a lesson for our time.

This story of patriotism, bravery abroad and at home, and most of all, deep commitment, sets in a gold frame the very essence of America. The story of G.I. Joe and Lillie helps us all remember that true love never, ever dies.

There is no greater love than when a child honors his parents, and in G.I. Joe & Lillie, Oak Ridge Boys tenor Joseph S. Bonsall pays a beautiful tribute to his parents Joe and Lillie Bonsall with a beautifully written memoir as a testament of their true love for each other.

G.I. Joe and Lillie's love story begins when they are called to duty in World War II. Joe was a street kid from Philly and Lillie was a farmer's daughter from Roanoke Rapids, NC. Both had a difficult childhood and left high school in the 9th grade, and both had a desire to help the war effort in the best way that they could. Joe & Lillie's journey began in May 1943, when at the age of eighteen, Joe enlisted in the Army, while Lillie left home in 1943 at the age of sixteen and worked in a defense plant in Michigan before joining the Women's Army Corps. (WAC) at the age of seventeen in August 1944. These two young people met, fell in love, married, and served their nation in the armed forces. They had a special marriage that spanned fifty-five years, one that was based on love, faith, loyalty, commitment, and dedication to each other, no matter what trials and tribulations that they faced through the years.

Since his childhood, Author Joe Bonsall has been fascinated with the idiosyncrasies of war, so in addition to sharing G.I. Joe and Lillie's story with the reader, he interweaves a richly descriptive and historical account of World War II, with photos interspersed throughout the book.

G.I. Joe & Lillie is an inspirational and compelling memoir that documents the lives of two American heroes, their love, and the memories that will remain forever in the author and his family's heart. You can't help but feel the patriotism and pride that runs throughout the story, and feel the enduring love and deep family values that kept G.I Joe & Lillie's marriage going throughout the years. This lovely memoir will make the reader pause and consider what our military personnel go through as they serve overseas, and the serious trauma and other effects (PTSD) that they face when they come home, and how their families provide the love, support, and perseverance to help them get through it with dignity, honor, and grace.

G.I. Joe & Lillie is an emotional memoir that will tug at the heartstrings and stir the soul. 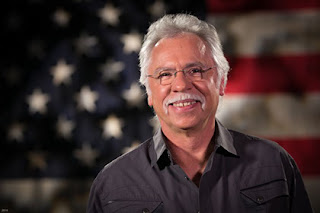 Joseph S. Bonsall is an avid writer, songwriter, and 40-plus year member of the legendary American music group The Oak Ridge Boys. His previous books include G. I. Joe and Lillie and several children's books. For relaxation, Joe retreats to his 350-acre farm on the Tennessee-Kentucky state line with his wife, Mary, and their seven cats. He also plays the banjo!

Posted by Kathleen Higgins-Anderson at 12:45 AM